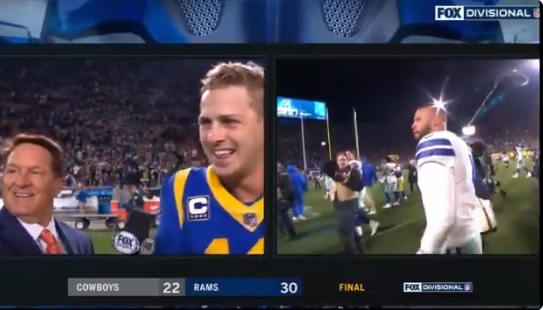 DeMarcus Lawrence was asked for his impression of Jared Goff today. His take was typical Tank 🔥🔥🔥#cowboyswire pic.twitter.com/1ONoHIAlHJ

Unfortunately for Lawrence the Cowboys lost and Rams corner Aqib Talib was a bit too excited when he congratulated Goff after the game on national television by reminding him about what Lawrence said.

He ain’t taking no fucking soul out here

Aqib Talib in reference to Dallas DE DeMarcus Lawrence’s claim that he would take Jared Goff’s soul in this game.

“They ain’t taking ur fuckin soul out!”

He’s right. Goff wasn’t sacked and only got knocked down once. pic.twitter.com/uHrQOLCKBw

FOX producers when Aqib Talib was near the mic after the game pic.twitter.com/3fVOAfS87U