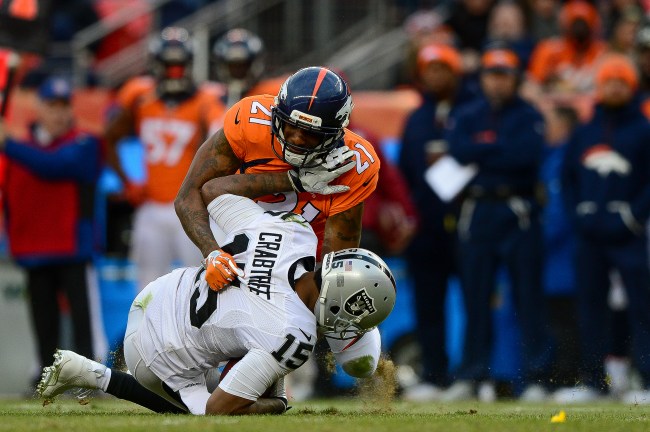 NFL fans will all remember the rivalry between Aqib Talib and Michael Crabtree. Over the years, it provided us with some great moments. Now Talib has taken the time to discuss their beef.

The beef started with Crabtree telling his fellow Dallas native that he better not see him around the city after a scuffle on the field. Then it escalated to a series of entertaining on-field scuffles.

It turns out the first time he snatched Crabtree’s chain on the field was actually inspired by a Broncos coach. According to Talib, in the week leading up to a matchup between the division rival Broncos and Raiders, coaches were pumping the team up and talking about all the jewelry the Broncos were going to wear during the game when one of the coaches said that he’d snatch one of their chains if he was on the field.

Talib missed that game, but the coach brought up the chains again the next time the teams met up. That’s when Talib sprung into action. After getting shoulder checked by Crabtree, Talib zoned in on that chain and grabbed for it, but only managed to break the chain.

The next time they met up, another scuffle led Talib to snatch the chain a second time. This time he actually got it of Crabtree’s neck, but didn’t hold onto it for long as they both ended up throwing punches at each other.

Eventually, these two would wind up running into each other while they were both out go-karting with their nieces and nephews. After exchanging words inside the establishment, they went outside and talked the beef through, finally squashing it after all of these years.

This rivalry was a lot of fun while it lasted, but it’s nice to see these guys squash their beef in retirement.