Arch Manning Has The College Football World Talking Once Again 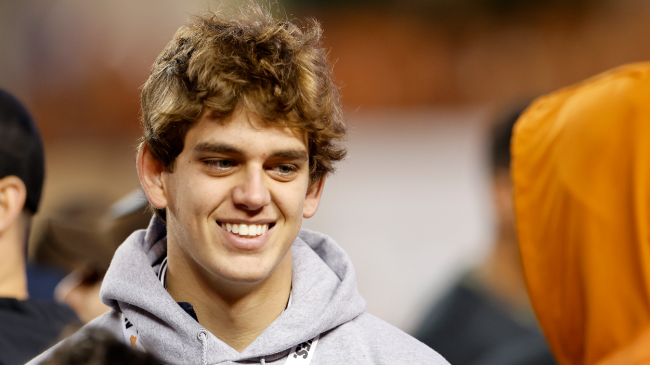 Arch Manning is going viral once again, this time for a throw made at a Texas practice session. The recently signed quarterback recruit is already winning over Longhorns fans.

Manning was seen throwing absolute bombs at the UT football facility, and it’s got the college football world talking.

The passer was one of the top players in this year’s recruiting cycle, with many believing he’s the best signal caller in the country. Arch, the nephew of Eli and Peyton Manning, is expected to provide immediate help in Austin.

Judging by a video that’s recently surfaced online, he could be closer to competing for the starting job than originally thought.

In a clip taken at the Longhorns’ indoor facility, Manning threw a few dimes to his new teammates with one throw in particular standing out.

The long touchdown toss has Texas supporters giddy over his future with the program.

UT’s Arch Manning and DeAndre Moore getting some off-season work on the 40 Acres. #HookEm @InsideTexas

Wide receiver DeAndre Moore, Jr. is on the receiving end of the pass, hauling in the rocket throw over his shoulder. That could be a connection we get used to seeing over the next few seasons.

Fans in Texas are excited, and they were quick to post their reactions on social media.

One person wrote, “Arch is going to push Quinn with his work ethic this year which is great for both of them. Excited to see some great play from the QBs this spring.”

Another fan said, “This is a GREAT ball! Perfect placement.”

Many are now saying he could supplant starter Quinn Ewers under center, though that’s a big jump based on a single throw.

Still, the arm talent is certainly there, and we’re now seeing why he’s been considered one of the best passers in the nation. Now, if he can just hang on to that pesky student ID, he might just have something going down in Austin.