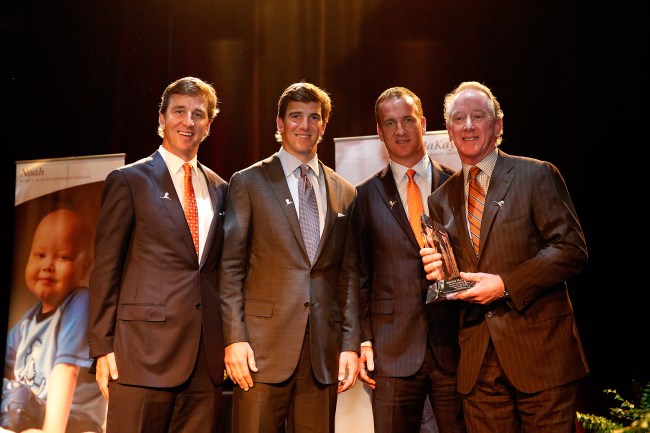 Is it too early to start thinking about your college football team’s 2023 H.S. recruiting class? Not really, no. The recruiting cycle never ends, especially at 247 Sports who have become one of the industry-leading authorities on College Football recruiting rankings.

The hype building around Peyton and Eli’s nephew Arch Manning is real. Two years ago he was being touted as the ‘Next Manning QB‘ (huge shoes to fill) and since then he’s made his high school debut at quarterback and dominated the competition. In his freshman season, he passed for 2,407 yards and 34 touchdowns in the air while running another 6 TDs. He was then named the MaxPreps National H.S. Freshman Football Player of the Year.

As we look toward Arch Manning’s sophomore season the expectations have been raised pretty much as high as they can go. 247 Sports has released their list of the 2023 recruit rankings and he’s the top-ranked QB and the #5 overall prospect in the nation with a 95 (out of 100) overall rating.

Arch has gone through a sizable growth spurt and now stands 6’3″ tall and weighs 195-pounds which along with his impressive stats has helped propel him to the top of the nationwide QB rankings for the class of 2023. The nation’s second highest-ranked QB sits right behind Arch on the list in the #6 nationwide spot. Malachi Nelson stands 6’3″ and weighs 180.

The young Manning will be one of the most closely watched college football recruits in history thanks to his family ties. Here’s the rundown from CBS Sports:

“He came in with big expectations and was able to perform at a high level despite the amount of attention he was receiving, which I find to be pretty impressive for such a young player,” 247Sports National Analyst Charles Power said. “Manning didn’t look like an inexperienced freshman being advanced for this age and is not overwhelmed by the speed of the game.”

Arch Manning has an obvious family connection at Ole Miss, considering that’s where his grandfather, Archie, and uncle, Eli, played quarterback and where his father attended. But his uncle Peyton is a legend at Tennessee, and one of the family’s trusted advisors, David Cutcliffe, is the head coach at Duke. (via)

Where Arch Manning will eventually play college football is a question nobody knows the answer to. An ESPN 104.5 CFB analyst made an interesting prediction on this about two months ago and it had nothing to do with Manning’s ties to LSU, Ole Miss, or Duke.

“When I look at it, who are the two schools that you can name that have pumped out these quarterbacks? Oklahoma – Lincoln Riley, quarterback whisperer. Clemson. Just look at what Clemson has had and it kind of dominoes with Deshaun Watson, Trevor Lawrence and the next cat they’re gonna have after Trevor is pretty doggone good too…I would keep my eye on Oklahoma and Clemson.“

I heard his heart is set on playing for FSU and not just because I went to FSU and would love to see the nation’s #1 QB suit up for the Seminoles. This is definitely a thing I heard and not something I’m making up on the fly at all. Nope. I heard it and I’m 50% certain it wasn’t just the voices inside of my head.

If you want to see the full list of 2023 Recruit Rankings from 247 Sports you can follow that link!