Arch Manning, Peyton And Eli’s Nephew, Is Only 13 But He’s Already Being Touted As The ‘Next Manning QB’ 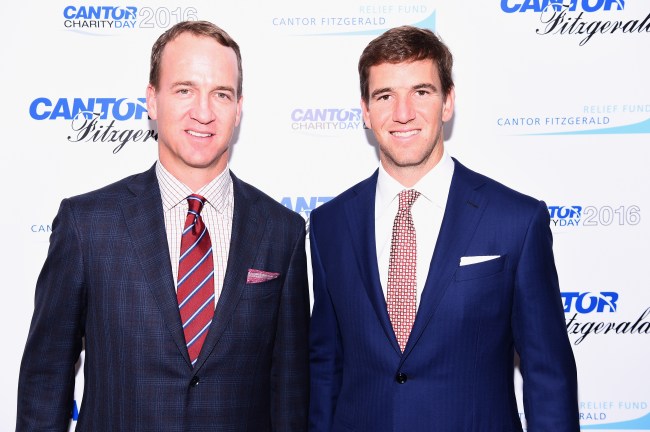 Eli Manning has been struggling for two seasons with the New York Giants, boasting an 8-23 win/loss record over the past two years. But Eli Manning‘s a two-time Super Bowl winner.

His brother, Peyton Manning, is one of the greatest NFL quarterbacks in history and that’s not even up for debate. Peyton’s also a 2-time Super Bowl champion as well as a 5-time NFL MVP, 14-time Pro Bowler, and he’s held NFL records for the most passing yards in a season (5,477), career passing touchdowns (539), passing TDs in a season (55), and passing TDs in a game (7).

Their father, Archie Manning, was an NFL quarterback for the New Orleans Saints, Houston Oilers, and the Minnesota Vikings. Archie’s oldest son (first son), was a highly-touted college prospect who signed to play with the University of Mississippi but his career was ended after a spinal stenosis diagnosis.

The family is a football dynasty that’s produced multiple Super Bowl champions and NFL MVPs. Now, Cooper’s 13-year-old son, Arch, is only in 8th grade but he’s being heralded as the ‘next great Manning quarterback’ after a video of him throwing passes hit Twitter. The video’s already been watched nearly a million times across all platforms.

Arch Manning, Peyton & Eli’s nephew, is NEXT IN LINE 💯 (via @QBCountry) pic.twitter.com/m36l18IrDB

To be honest, I’m not really seeing anything magical here. According to USA Today, the 8th grader has started receiving attention from colleges after this video’s gone viral. They’re fine passes. He seems talented. But he also has every coaching advantage on the planet in the form of his family. His uncles are Peyton and Eli! His grandfather and namesake is Archie!

The video was originally published by QB Country, a quarterback training and development company in New Orleans, with the description: “How bout that”!! Meet QB Arch Manning of Newman Middle School (La). Btw that’s Heid Manning (little bro) at Center. Baller Manning bro’s tradition continues at Newman.” The video has been viewed more than 863,000 times.

Newman Middle is officially Isidore Newman School, a private, college prep academy in the uptown section of New Orleans. It is also where the older generation of three Manning boys played football through high school in the 1990s. (via)

There’s absolutely no doubt in mind that this kid will eventually play football at an SEC college as long as he stays healthy. Even if he eventually goes somewhere as a backup, schools would be foolish to not take a chance on him.

“He’s got a high football IQ. I think one of the things about Cooper, he grew up around it. Watching Cooper through the years, he’s a guy who understands the game,” Stewart said. “And he’s got two good uncles that have worked on some footwork, and throwing with him a little bit. He does look sound. If you look at his mechanics and his release, he’s further ahead than most we’ve had. I think he looks the part right now.”

I’m sure we’ll be hearing his name nonstop in about three years when he starts announcing where he’ll be taking official college visits. I can definitely see him going to LSU and staying in his home state of Louisiana or following his uncle to Tennessee where he’d be a literal god on campus.