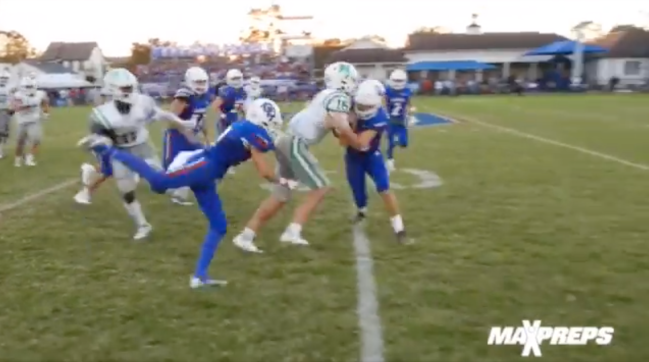 Arch Manning continues puts on a show week-in and week-out. During Isidore Newman’s Week 2 matchup against Metairie Park County Day, the nation’s No. 1 recruit in the class of 2023 had a day.

The nephew of Peyton and Eli completed 20 of 28 passes for 234 yards with three touchdowns and no interceptions. Arch also ran the ball nine times for 58 yards and a score.

While his cannon arm and absurd accuracy continue to be his calling card, the 6-foot-4, 215-pound junior has some serious strength in his lower body. The highlight of Friday night’s performance came on the ground when he took off running, absolutely TRUCKED one defender and carried a few stragglers for a first down before being pushed out of bounds.

No. 9 hops on his back at the 40-yard-line. Arch carries him, while running over No. 6, all of the way to the opposite 45-yard-line, where it takes three other defenders to bring him down.

Also, look at that early fake in the pocket. He had the defensive end JUMPING jumping.

Arch Manning hit the truck stick then took them for a ride 😳 pic.twitter.com/e9o2hd1Mn4

The alternate angle of Arch’s full-on BEAST MODE run is at the 11-second mark below.

He also threw an 80-yard touchdown bomb with the greatest of ease. Just a little flick and score. Watch all five of his TDs here:

Arch already visited Georgia last weekend and will stay home this weekend. He will head to Tuscaloosa for Alabama/Ole Miss next Saturday, Texas on Oct. 16, Ole Miss on Oct. 23 and Clemson on Oct. 30.

Is it any wonder why Arch is the only person that Lane Kiffin follows on Instagram?

Here are his full highlights from last night: