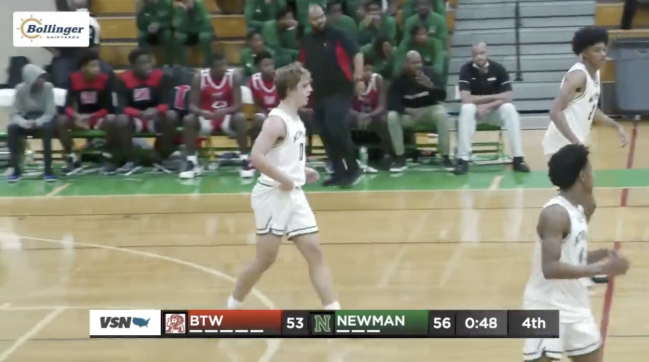 At 6-foot-4, 215 pounds, Arch Manning is the No. 1 high school football recruit in the Class of 2023. Although he is the most-coveted quarterback prospect in recent history, he is also throwing down on the hardwood.

Manning, who plays for the Isidore Newman basketball team in the offseason, has had a lot of high-profile visitors in recent weeks. Nick Saban and Bill O’Brien swung by New Orleans to watch him hoop last week, and Kirby Smart’s Georgia staff was in attendance after winning the national championship.

When the Greenies traveled to Parkview Baptist on Friday, that was again the case. Although Smart himself was not in the stands, three members of the Bulldogs’ staff was in town to watch Manning hoop.

And he ended up putting on a show. Manning was dominant on the glass, dropped dimes, and even threw down a breakaway dunk in transition.

Here are the full highlights:

Isidore Newman went on to win the game by 31 points and moved to 18-5 on the year. Manning’s recruitment is obviously on everybody’s mind, but as of right now, he is focused on basketball and will return to his college decision after the Greenies’ season comes to a close.

Although he isn’t the best player on the Newman roster, Manning has made it very clear on a basketball court that he is a generational talent and a one-of-a-kind athlete. There are a lot of people at 6-foot-4 who cannot dunk, but Manning made it look easy.