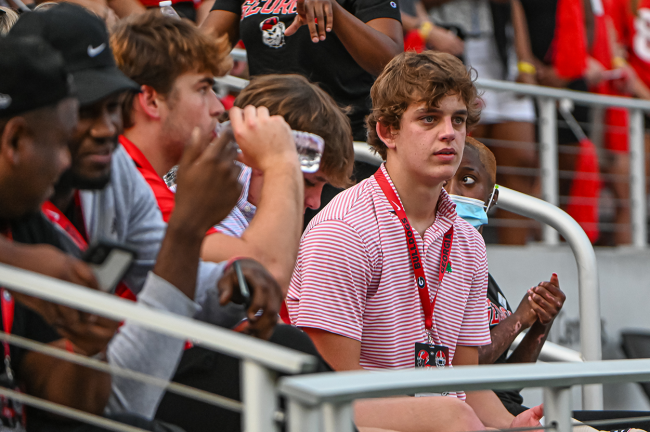 Arch Manning’s recruitment is reaching the crucial period of the year. Spring practices are in full swing around the country and Class of 2023 recruits are starting to make decisions.

In fact, the quarterback dominoes are starting to fall. Tennessee received a commitment from five-star recruit Nico Iamaleava on Monday which should get the ball rolling for a string of commitments to come.

While Manning’s commitment may not be imminent, the picture is starting to take shape. He is down to Georgia, Ole Miss, Texas and Alabama with LSU and Florida lingering behind. The next few months will be very telling, starting with his most recent visit.

Manning was in Athens over the weekend for a return visit to the University of Georgia.

Bulldogs fans were being creepy while the top prospect in the Class of 2023 was in town, but it does not sound like that hindered his experience. The most recent update about head coach Kirby Smart’s program is positive.

Manning’s high school coach, Nelson Stewart, spoke with 247 Sports and had nothing but good things to say about his quarterback’s visit. While they had been to campus before, this was the first visit that allowed Manning to watch practice and sit in on meetings.

“Both he and his dad loved the organization of practice,” Stewart said. “It was really, just everybody was always moving. They loved the meetings and installs with Coach (Todd) Monken. It sounded like the structure was just great. Everything flowed and the attention to detail. Obviously Kirby’s enthusiasm, not just with the starters but with the backups, that was something both said was great. The energy Kirby has, you see on the sideline, coaching all his players, not just one specific group.”

In addition to the on-field logistics, the visit reaffirmed everything that Manning and his family had previously thought about the program.

“Obviously they love Athens,” Stewart said. Love the facilities and I think they came away reaffirmed with things they thought. Just incredibly well organized, energetic and I’m glad he’s able to go into meetings and go into practice and see how things are really run. That’s the neat thing about Arch, his family, this recruitment. It’s not about the bells and whistles, it’s about getting in the weeds and seeing how things work and forming those relationships and I think both came back really excited about everything he saw.”

Arch Manning was thrilled with what he saw from the spring practice meetings at Georgia.

While on campus, Manning spent time around the Georgia players and got a feel for what the culture is like. He also got to be around the quarterback room, which Stewart says was a big highlight.

“He got to see how those guys interacted,” Stewart said. “It’s really seeing college installs and being able to see whether it’s a protection or a concept, that’s what he likes. Being able to sit in as a player. He went almost as a player and it was all good. He said it was a great atmosphere in the quarterback room, he got to see those guys interact and I think thats the biggest thing. Arch likes to have relationships with everybody and sit in that quarterback room and it resonated.”

All-in-all the visit could not have gone better. Georgia has a real shot.

“You compound that with Athens, Coach Smart’s energy throughout practice and emphasizing speed, it’s a well-run organization and that’s why they’re in it,” Stewart said to sum things up.

Manning will next take a return visit to Texas this weekend. He will arrive in Austin on Thursday and stay through the weekend.

After returning from his time with the Longhorns, Manning does not have anything on the calendar. However, he wants to drive across the causeway and check out what is going on at LSU, and would like to see Alabama, Florida and Ole Miss before making a decision about what might be next with his recruitment.