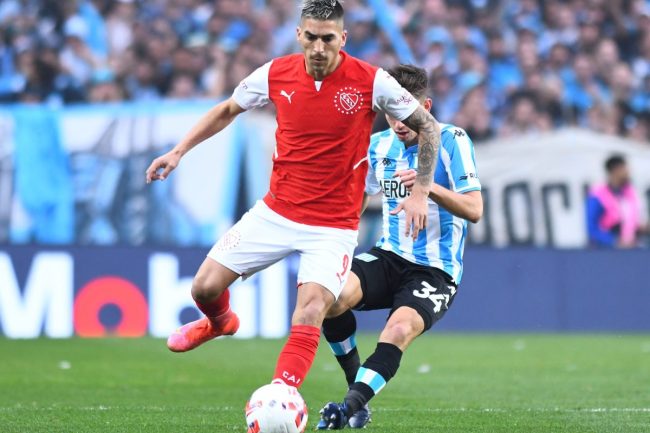 One of the oddest scenes you’ll see in professional sports occurred earlier this week. A professional soccer player in Argentina was hit in the face by a fish thrown from the crowd. The fish was apparently tossed by a rival fan sitting in the stands.

The player that was struck is Leandro Fernandez, who plays forward for Independiente. After getting slapped across the face by the sea creature, Fernandez fell to the ground wincing in pain (or embarrassment, or utter shock). He stayed there for some time before being carted off the field.

In a South American match last night a player was hit by a fish thrown at him by an opposing fan. @StoolFootball pic.twitter.com/VVjQhke8yF

Just so many questions, here. What kind of fish? Why was that the animal of choice? Who is the thrower?

While the attention is on Fernandez, you’ve got to give some props to the fan in the stands. First off, having both the idea and ability to sneak a fish into the arena is top notch. The fan’s accuracy is impeccable, hitting the bullseye with this Herculean heave.

As you can imagine, the immediate reaction on social media was fantastic.

Most had a laugh at the fact that the player needed to be carted off the field after being hit by the fish. Soccer players are known for flopping, and this didn’t appear to be as severe a shot as Fernandez made it seem.

I mean that’s crazy disrespectful but I can’t help but laugh when I saw the cart come out. 😂

Any word on whether or not he survived?

Others noted the skill and accuracy of the fish thrower.

That’s actual impressive. Can you imagine how hard it is to throw a slippery fish with that kinda accuracy?

Have to agree on all accounts.

Thankfully, Fernandez dusted off the shot after receiving some brief medical attention. He returned to pitch to finish the match.