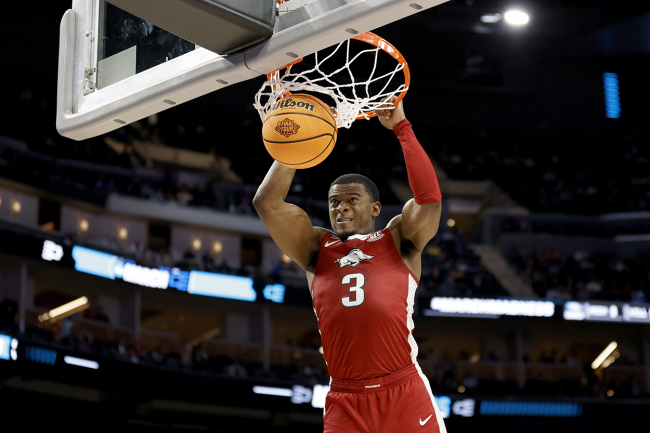 Trey Wade has not played football since the 8th grade. Now he is the newest member of the Arizona Cardinals.

Wade stands 6-foot-6, 220 pounds. He spent the last six years playing college basketball, but will hope to find a professional career as a tight end instead of pursuing a future in the NBA.

On Monday night, it was announced that the Arizona Cardinals had signed Trey Wade as an undrafted free agent.

Wade, born in Georgia, is 23 years old going on 24 in July. He had an unconventional college journey but was an integral part of Arkansas’ Elite Eight run.

Mostly unranked as a high school recruit, Wade committed to UTEP as part of the Class of 2016. He redshirted as a freshman, averaged 7.2 points and 4.2 rebounds in his first season on the court and then transferred to South Plains Junior College.

While at South Plains, he was an all-region and all-conference performer, earning a three-star ranking as a JUCO recruit. In the process, he helped the Texans to a No. 2 national ranking while staring all 34 games and averaging 13.4 points and 6.9 rebounds.

Following the 2020/21 season, Wade transferred to Arkansas for his super senior year. While in Fayetteville, he made 24 starts. Although he averaged just 3.6 points and 2.5 rebounds per game, his presence on the court was crucial and the Hogs went 18-4 in their final 22 games with him in the starting lineup.

Now, after completing a very unique college basketball career, Trey Wade is headed to the NFL.

Since the end of March Madness, Wade has been training and working out with NFL organizations across the league as a tight end.

On the Thursday of the first round of the NFL Draft, he declared that he was going pro in football.

Although he, expectedly, did not hear his name called, Wade is headed to Glendale as an undrafted free agent. Interestingly enough, he was at UTEP when Sean Kugler was the head football coach of the Miners, who is now a lead assistant in Arizona. Perhaps that connection helped him to make the league.

Wade is also one of a few basketball players-turned-tight ends to take this path in 2022, including Texas Tech’s Marcus Santos-Silva.