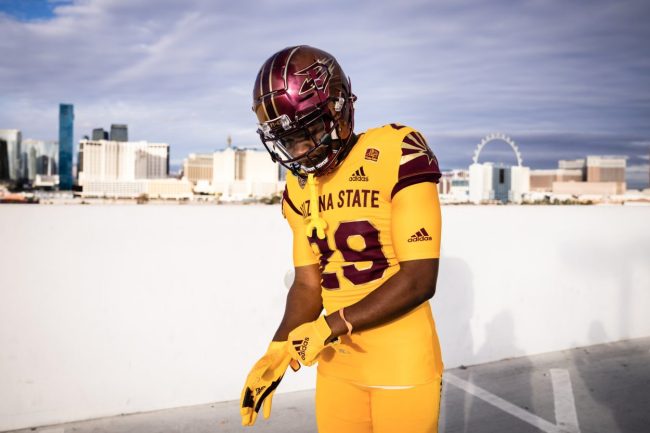 When Arizona State takes the field against Wisconsin at on Thursday night, the Sun Devils will be hard to miss. Played at the brand-new Allegiant Stadium, the Las Vegas Bowl pits two 8-4 teams from the Pac-12 and Big Ten against one another.

No matter who wins the game itself, the uniform battle has already been decided. It isn’t an original kit for the game itself, but there is an added element that is unique to this year’s bowl.

Arizona State unveiled its pants, jersey and helmet combination for the game and it’s really fresh. Gold from head to toe, numbers, letting, shoulders and helmet offer just enough maroon without taking away from the flashiness of the primary color.

The team released its uniform with a very lit video. Behind the players, the skyline of the strip peeks out in the background as the two dance to YBN Nahmir’s ‘Talkin.’

On the shoulders is a nod to the state flag, which ties the entire uniform together. However, it is an intricate detail on the back of the helmet that is the coolest feature.

A decal of the entire ‘Las Vegas Strip’ is displayed across the bottom of the lids. It is the only game-specific feature of the uniforms, other than the bowl patch, and it is so, so cool looking.

The Strip. The drip. pic.twitter.com/LZgvQTDY39

Arizona State will take the field against Wisconsin at 10:30pm ET on Thursday night. They’ll be hard to miss.