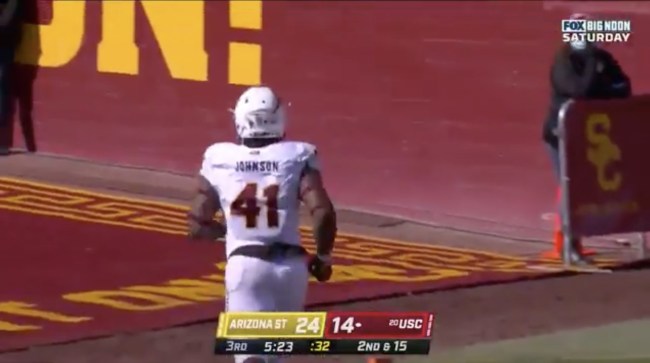 The Pac 12 began its 2020 college football season with a 9:00 a.m. PST kickoff between Southern California and Arizona State on Saturday. That early start time called for 4:00 a.m. wakeup calls, 4:45 a.m. team meals, and an adjusted pregame schedule to correspond with the earliest kickoff in conference history. It may have thrown off some of the usual ‘body-readiness’ for both teams and ASU’s Tyler Johnson may have been one of those people.

Toward the end of the third quarter, the Sun Devils’ defensive lineman broke into the Trojans’ backfield and pulled down quarterback Kedon Slovis for the sack. Johnson popped right up, looked immediately toward his sideline and pointed to the locker room with a look of sheer panic.

He sprinted straight to the tunnel for undisclosed reasons without any sign of injury.

Play by play broadcaster Joel Klatt caught on to what was happening and recognized the incident.

“When you leave that quick with no assistance, folks, you all know what he’s going to do,” he said.

No more than five minutes later, Johnson returned from the tunnel with a skip in his step and a big smile on his face. Fox’s booth crew noted the grin and hinted again at the conclusion that the redshirt junior had to use the bathroom and couldn’t hold on any long. Gus Johnson went so far as to say that he “feels lighter” on the sideline.

Of course, the internet reacted to hilarious timing and circumstance of the moment.

Tyler Johnson after that sack pic.twitter.com/1lN8KP838M

It’s always funny when things like this occur, but it’s even funnier that it came after a big defensive play.