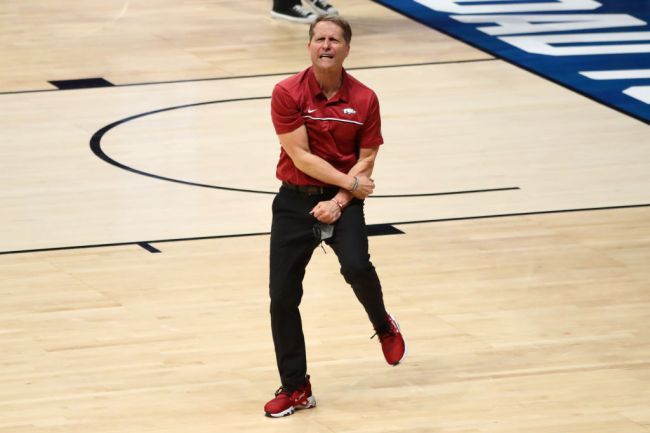 Despite Arkansas posting a 24-6 record during the regular season and earning a No. 3 see in the tournament, Eric Musselman’s Razorbacks weren’t given too much respect from the national media heading into March Madness. While things looked shaky in round one against Colgate, things clicked for Arkansas in the second half as it walked away with a 85-68 win pinning the Hogs against six-seed Texas Tech in round two.

Heading into the matchup, CBS analyst Todd Fuhrman broke down the game and threw all sorts of shade Musselman’s way and essentially gave the Razorbacks zero shot of beating the Red Raiders.

“When you look at the head coaches in this game, I think it’s one of the biggest mismatches you’re going to see round of 32,” Fuhrman said. “Chris Beard has to be licking his chops knowing Eric Musselman is on the other sidelines.”

After being gifted that bulletin board material, Arkansas went on to beat Texas Tech 68-66 on Sunday and after the game, Musselman was sure to address Fuhrman’s remarks.

“I was alerted before the game about somebody at CBS who said something about the coaching matchup, so I was a little shocked we could actually win a close game, based on his comments,” Musselman said. “Whoever that guy is, I’ve never heard of him in my entire life. So his credibility is absolutely zero. But anyway, coaching in a lot of games, I hope that experience helps. The NBA game, when you get to coach 82 games, there’s a lot of close games instead of a college season of 30.”

Muss put @ToddFuhrman in a body bag after the game 🤣🤣🤣 pic.twitter.com/AuPlkaMW8y

This is elite stuff from Musselman. Plenty of coaches wouldn’t pay any attention to outside noise, but he addressed it head-on and took his own shot right back at Fuhrman. That’s the way Musselman rolls because he was also asked whether he lets outside noise motivate him and he made it very clear that he absolutely does.

A boomer out there may not like Musselman’s style here and say that he’s letting the outside noise have too much of an impact on the team, but letting that outside noise in is clearly fueling this squad. Plus, it’s working, the Hogs are heading to the Sweet Sixteen for the first time since 1996.