A Decade Later, Armando Galarraga Wants MLB To Give Him Credit For His Lost Perfect Game 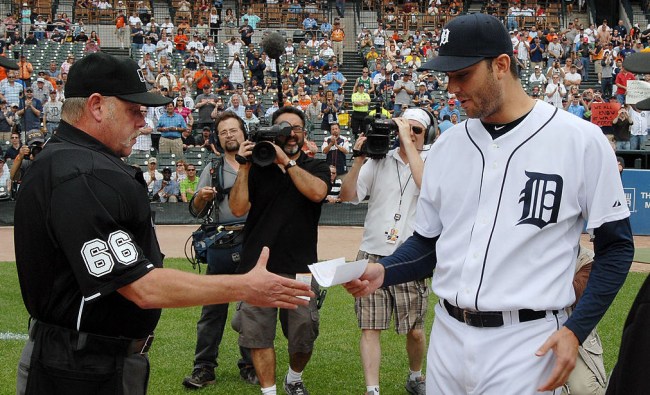 It can be spilling your ice cream at day camp when you were a kid or remembering the first time you heard your mother curse. You can recall how many goals you scored in your sophomore season of high school soccer or you can remember the first movie you saw in theaters. There’s no rhyme or reason to the way our memories work (well, I’m sure there is, but what do I look like, Sigmund Freud?) — some things just stick. Former Detroit Tigers pitcher Armando Galarraga getting supremely screwed out of his perfect game is one of them.

On June 6, 2010, Armado Galarraga — who was otherwise a relatively average journeyman pitcher — was on the cusp of the 19th perfect game in Major League Baseball history, as just one lone out stood between him and eternal baseball glory. The rest, as they say, his history.

Galarraga retired the first 26 Cleveland Indians batters in order, then induced a ground ball between first and second base by Jason Donald. First baseman Miguel Cabrera came off the bag to field the grounder and threw to Galarraga, who caught the ball and clearly stepped on the base before Donald arrived.

But first base umpire Jim Joyce ruled Donald safe, an error he acknowledged immediately after the game. Galarraga retired the next batter, but the perfect game (and no-hitter) was lost. [via Yahoo Sports]

Now, just shy of a decade later, Galarraga is calling on MLB to do the right thing, open up the history books, and give him the perfect game that many felt he earned.

“I was like, what can I do to have a better finish to the story?” Galarraga told The Athletic. “How can Major League Baseball give me the perfect game? Because it was perfect, right?”

He wonders, now that baseball has replay, now that it is all in the past, if MLB would consider changing the record, taking a hit away from Jason Donald, acting as if Trevor Crowe’s ensuing at-bat never happened, and giving him a perfect game. It was something commissioner Bud Selig and Major League Baseball actually considered at the time.

Unfortunately for Galarraga, reversing his perfect game would open a pandora’s box of call reversals and that’s just not something that MLB seems prepared to do.