In Unsurprising Discovery, It Turns Out Army And Navy Were Just Playing The Circle Game And Not Flashing A Racist Hand Gesture During Pregame Show 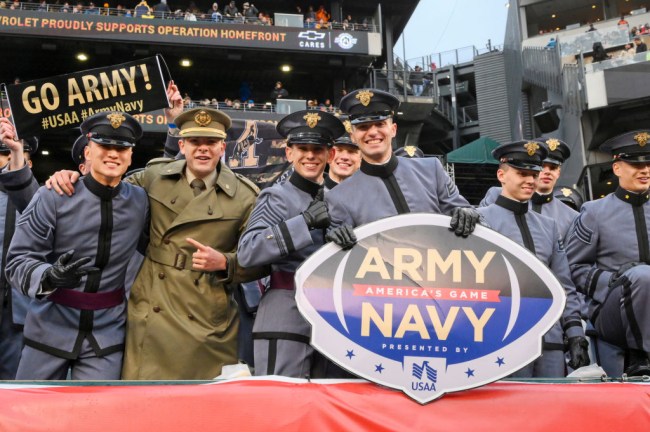 Navy snapping Army’s three-game winning streak wasn’t the story of rivalry game last week. President Donald Trump sitting among cadets and midshipmen wasn’t even the hottest topic of the game, instead, it was the hand gestures that were flashed by some during the pregame show.

ESPN’s Reece Davis made his way into the crowd and behind him, a few cadets and midshipmen made a circle with their hand and held out the symbol. This is also known as the circle game, which anyone under the age of, let’s say 30, knows about.

Military officials announced that they would investigate whether or not the hand gesture was a symbol of ‘white power’ or simply part of the circle game.

#NEW on @OANN: Military officials are now investigating if a hand gesture displayed by cadets and midshipmen at the Army-Navy football game on Saturday were intended to be a “white power” symbol or simply a part of the “circle game”. pic.twitter.com/IlejYELcaK

For those that don’t know much about the circle game, it’s been around for quite some time. It’s essentially a childish game of gotcha where someone simply makes their hand into a circle, usually holds it on their leg and if someone looks at the circle the person gets a friendly punch to the arm. It’s a completely pointless and harmless game that kids take part in, that’s it.

The Navy probe about the hand gestures made during the pregame show found that they were simply part of the circle game and not a symbol of ‘white power.’

A Navy probe of the event found that the students were “participating in a sophomoric game” on Saturday and had no racist intent, according to ESPN.

The Navy said that reviews of the footage, more than two dozen interviews and background checks by the Naval Criminal Investigative Service and the FBI determined that the two freshmen midshipmen were participating in the “circle game” with West Point cadets.

Somewhere between my elementary school days playing the circle game as a young whippersnapper and 2019, making the hand symbol extremely similar to the worldwide hand gesture for ‘ok’ has been tied to ‘white power’ and ‘racism.’

The investigating officer concluded that the cadets were playing a common game, popular among teenagers today, known as the “circle game” and the intent was not associated with ideologies or movements that are contrary to the Army values.

The Anti-Defamation League describes the racist form of the symbol is a hate sign when the fingers form ‘WP’ for ‘white power,’ but it turns out these college student cadets and midshipmen were just playing a game on national television in a super fun atmosphere at a football game.

You may recall seeing the circle game in the news not so long ago when a Cubs fan threw up the symbol and was handed a lifetime ban from Wrigley Field.