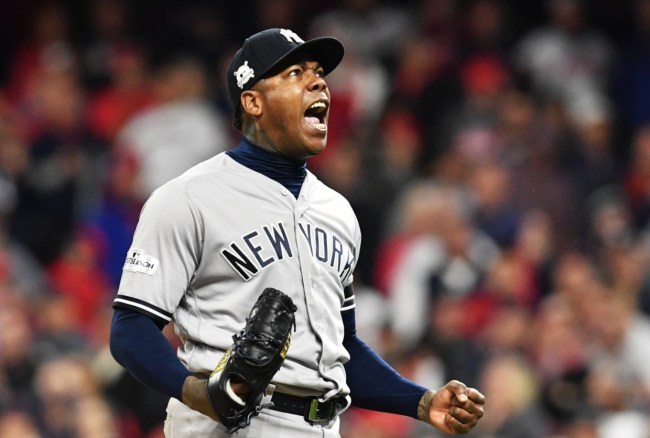 Aroldis Chapman is having quite the offseason. Not only does he look like the world’s strongest man after getting absolutely yoked, but he’s also the owner of a brand new, absurd custom-made Jeep.

The Jeep not only has six wheels, but it’s also lined with black Kevlar and has a red interior; the thing looks downright mean. It’s certainly not the most subtle of vehicles, but Chapman isn’t the most subtle of guys either, so it fits pretty well. The Jeep is going to absolutely dominate the streets of New York City.

South Florida Jeeps is the one responsible for the custom job and according to TMZ the price tag of the Jeep is $150,000. As for how the six-wheel vehicle came to life, they had to actually cut the frame of a Jeep in half before extending it four feet and hand-making the rest of the extended SUV.

Under the hood is a twin-turbo diesel engine with 600 horsepower and isn’t lacking on the high-end features on the interior.

“He came and test drove it the other day,” Joe Ghattas, the owner of South Florida Jeeps said. “He doesn’t speak a whole lot of English, but he was smiles from ear to ear. He said, ‘It’s f—ing awesome.’”

And yes, Chapman does plan on bringing the new whip with him to NYC as the Yankees are set to report to Spring Training on Wednesday.