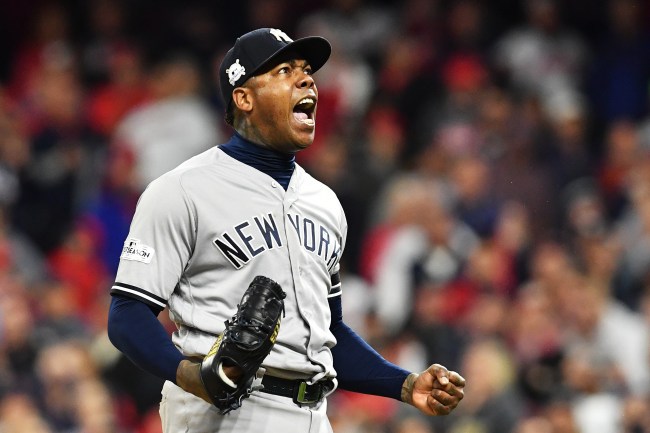 Aroldis Chapman of the New York Yankees is already one of the most lethal closers in the big leagues, with the lanky left-hander capable of throwing a baseball through a brick wall at speeds of 100+ miles per hour. As terrifying as it has to be standing in the batter’s box a mere 60 feet and 6 inches away from that has to be, once baseball is back following its hiatus and postponed start date due to the current pandemic, opposing players will probably be shaking in the knees even more when facing Chapman this year.

That’s because a photo is circulating around the Internet of Aroldis looking more like a GD NFL defensive end than a MLB pitcher, with the Yankees closer taking to Instagram to show-off exactly what he’s been doing while in isolation — and it’s lifting lots and lots of heavy weights.

Just take a look below at the image that’s gaining so much attention.

Dad coaches: you can’t get too big for baseball

Aroldis Chapman got all roided up to make room for his new tat. pic.twitter.com/fCPuMHZNyF

Aroldis Chapman spent the last 3 months preparing to light up the first Astros batter he sees with 120 to the rib cage 💀 pic.twitter.com/MLEjOa8KoC

Aroldis Chapman is going to be throwing 120 mph this year holy SHIT pic.twitter.com/QC7gYdYzT1

I need some of whatever Aroldis Chapman has been eating…

Based off of Aroldis Chapman’s IG feed — which includes loads of videos and pics of him lifting a bunch this offseason — we probably shouldn’t be too surprised that the closer added bulk. But to see him now compared to a few months ago is terrifying, with his left arm looking swole and ready to throw a baseball harder than anyone ever has before. With just one image, Chapman has scared the living hell out of every batter who might face him this season, so this is your warning.