Already Jacked Chase Young Is Training With Arnold Schwarzenegger, So NFL QBs Have Been Warned 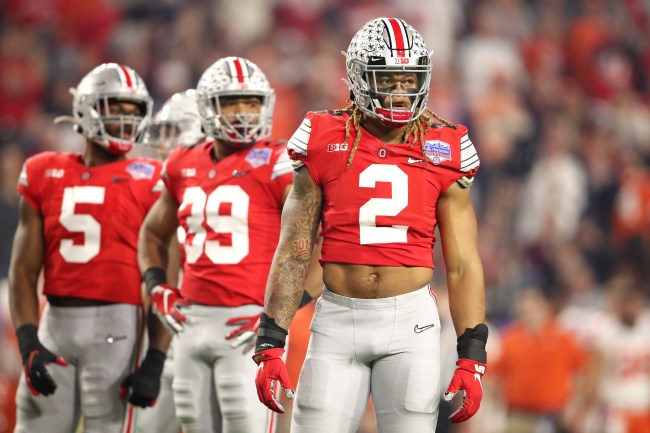 Chase Young proved to be a man among boys in college football while playing defensive end for the Ohio State Buckeyes, with the dude racking up 27 sacks and 35.5 tackles for loss in the past two years. It’s that kind of production that led Young to become a Heisman Trophy finalist — a rare feat for a defender — as well as why so many talent evaluators are predicting he could go as high as No. 1 overall in the 2020 NFL Draft. Basically, the world is at Young’s fingertips.

While everyone continues to rave about Chase Young as he gears up for the NFL — even being called better than the Bosa brothers, which is high praise considering Joey Bosa and Nick Bosa‘s accomplishments so far in the league — the kid isn’t just sitting back and absorbing all the praise. In fact, he’s doing the opposite, prepping himself for the next step by getting in even better shape than the beastly defender already is.

Don’t think that’s even possible for a guy who stands 6’5″ and weighs 265 pounds? Think again, because Young was recently seen training with Arnold Schwarzenegger, who, you know, sort of knows a thing or two about being jacked. Take a look at the video below, which was posted on Twitter.

It’s scary to think that the Ohio State product could get even leaner and meaner, but there’s Arnold encouraging him and barking in his ear to push himself while lifting. Considering Schwarzenegger won the Mr. Universe title at age 20 — then went on to win the Mr. Olympia contest seven times after that — it’s safe to say Young chose the right man to help get him even stronger. It’s actually scary to think about; so watch out, NFL quarterbacks.

And if you needed more proof as to Chase Young’s already dominant standing as he heads towards the NFL Draft, just look at the graphic below from PFF College, which ranks the defensive end as the highest-graded at the position since 2014. That’s pretty impressive, no?

Whether Young goes No. 1 overall to the Cincinnati Bengals — a team mostly linked to LSU quarterback Joe Burrow — or falls to another team, whichever franchise adds the freakish defender is going to be really happy and lucky. And to have him working out with Arnold Schwarzenegger only validates how committed the dude is to making his body primed for the NFL.