NFL Draft Expert Todd McShay Gives Ultimate Praise To Chase Young And Explains Why OSU Defender Should Be No. 1 Pick 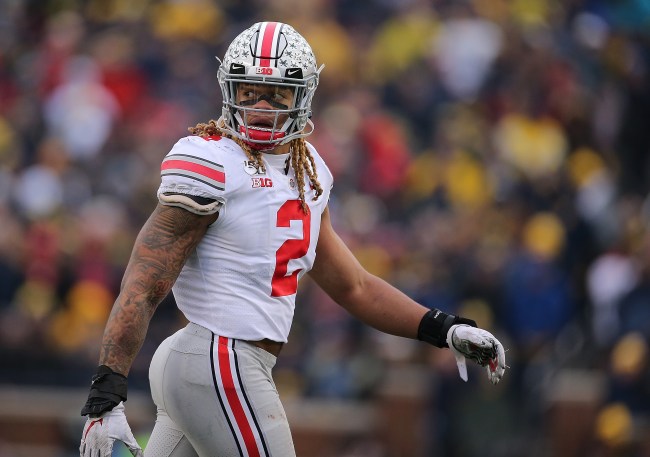 Todd McShay has been evaluating NFL Draft prospects for two decades, watching film and studying their skills to determine where he thinks players should be chosen each year. While it’s a total crapshoot — and is often as unpredictable as the weather — McShay has been able to make a pretty solid living doing nothing but predicting NFL draft boards, compiling mock drafts for our amusement. Sounds like a dream, right?

From evaluating “can’t-miss prospects”, to guys teams reached on, to hidden gems, Todd McShay has seen thousands of players on film. But who’s that one guy who stands out the most to him? As you could probably tell by the headline and photo above, it’s current Ohio State defensive end Chase Young, who’s projected as a top-3 pick if he enters the 2020 NFL Draft — something that the Heisman Trophy finalist says isn’t a definite just yet.

Speaking about how dominant Young has been — as well as the potential he has whenever he does enter the NFL — Todd McShay gushed about the Ohio State defender, even going as far as saying that it’d be “one of the biggest shocks of my scouting career” if Chase Young doesn’t turn out to be a superstar. That’s some high praise from an expert draft guru like McShay.

But the draft analyst didn’t stop there, because, when asked who he thought should be the top pick in the 2020 NFL Draft during a segment on The Dan Patrick Show, Todd McShay didn’t give a BS answer, openly campaigning for Chase Young to be taken first overall.

“I’m going to give you the honest answer. I would take Chase Young, and it’s almost never that I would say that. You look at the last two years for example, I think there are what, eight quarterbacks that were taken in the first round? I think [there’s[ two of them that you feel really great about that are going to be really good starters in the league for a long, long time.

“Chase Young, it would be one of the biggest shocks of my scouting career, 20 years, if he didn’t turn out to be a very, very high-end player. And the quarterbacks, at best… they’re like 40-60, in terms of how they turn out. Now I know how important they are, but the second most important position in scouting, in evaluating, is finding the guy that can get after the quarterback. And if I know I can have somebody who is as good, if not better, than the Bosas in Chase Young, I would have to go in that direction.”

In the past 20 years, or since Todd McShay has been evaluating NFL prospects, only four defensive ends have been selected No. 1 overall — Courtney Brown (2000), Mario Williams (2006), Jadeveon Clowney (2014), Myles Garrett (2017) — as many teams, rightfully so, prioritize quarterbacks more than any other position. But Chase Young is a different animal, according to McShay, and is somebody teams may regret passing on if given the opportunity to draft him.

With the NFL Draft analyst recently saying Young is better than both Joey Bosa and Nick Bosa — both former Ohio State products who helped groom Chase Young and have seen immediate success in the NFL — it’s clear that Todd McShay is all-in on this kid, so we’ll have to see if NFL teams agree come draft time.