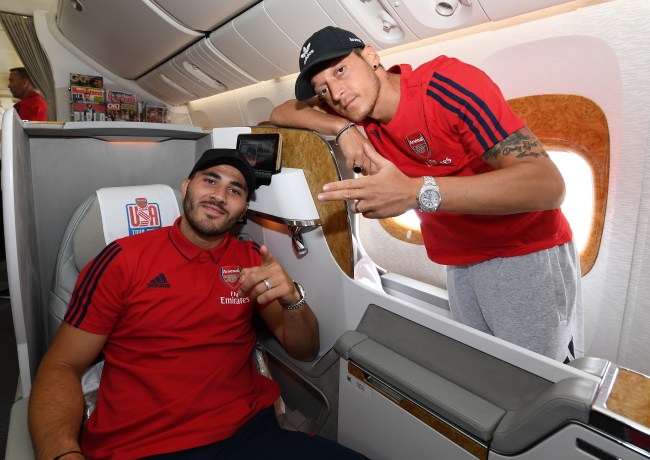 The team members of Arsenal are back in London this week after playing their pre-season games in America and things got REAL for Mesut Özil and Sead Kolasinac.

Mesut Özil rolled up to teammate Sead Kolasinac’s house in what appears to be his G-Wagon Mercedes when armed attackers tried to carjack him with knives. Both players made it through the incident unscathed and the jokes kind of wrote themselves for Arsenal fans.

After a brief kerfuffle, Mesut Özil took off in his SUV and met London police at a nearby restaurant while Left Back Sead Kolasinac appeared to play the first proper defense that anyone’s seen from him in years. Police are now on the hunt for these armed attackers that can be seen in the video wearing gear to obscure their faces.

The attackers were clearly after Mesut Özil’s Mercedes G-Class wagon because after he took off and left Kolasinac standing the attacker went after the SUV, chasing him across North London, before cutting their losses and disappearing.

Footage has emerged of Sead Kolasinac fighting off a pair of knife-wielding attackers during an attempted robbery, Mesut Ozil was also involved in the incident.

Arsenal have confirmed both players were unharmed.

A statement from the Met Police @metpoliceuk:

"Police were called to Platts Lane, NW3, shortly before 17.00hrs on Thursday, 25 July to reports of an attempted robbery.

"It was reported that suspects on motorbikes had attempted to rob a man who was driving a car."

"The driver, along with his passenger, managed to get away unharmed and travelled to a restaurant in Golders Green, where they were spoken to by officers.

"There have been no arrests. Enquiries continue."

It’s pretty funny to see a multi-millionaire pro athlete like Kolasinac try and square up against those attackers with knives who clearly DGAF about him and just wanted the car. But he was ready to throw down and even though I’m 100% FUUUUUCK Arsenal as a Spurs fan I have to give props where props are due because he was there to protect his teammate and didn’t back down.

Here’s the rundown from the UK’s Sun:

A “terrified” Ozil and his wife Amine, who was in the car at the time of the attack, then abandoned the gold-trimmed SUV and fled on foot.
They took refuge in their favorite Turkish restaurant, who the star had called for help during the drama.

Staff immediately rushed to the £350,000-a-week star’s aid, piling out onto the street to help chase away the would-be carjackers.
Police rushed to the scene and cops were later spotted questioning the Gunners forward.

Financial worker Azuka Alintah, 36, was out food shopping when he witnessed the end of the horrifying chase.

I have to imagine that these attackers didn’t realize who was driving that G-Wagon or they wouldn’t have been stupid enough to attempt this robbery, or maybe they are genuinely dumb enough to try and carjack one of the biggest stars in the biggest sport in one of the safest cities on the planet with security cameras all over the place.

It’s not a matter of ‘if’ but ‘when’ these attackers will get caught.

For more on this, you can head on over to Twitter Moments.