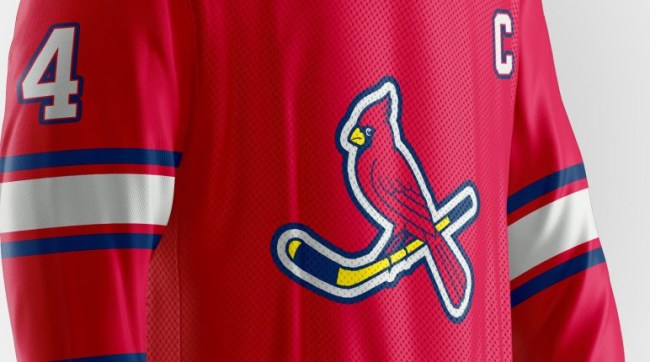 As a sports fan, there aren’t many things cooler than when some talented graphic artist designs special alternate uniforms with a unique theme that’s never been seen before.

There’s just something about seeing our favorite sports teams uniforms transformed into, well, into something much cooler than what they currently wear.

Some examples of this we’ve seen in the past include…

And now, we’ve got one more set of unique uniforms to add to the list as a talented young artist from St. Louis, who goes under the name Ferry Designs, has created hockey uniforms for all 32 MLB teams and they’re pretty incredible.

Take a look and see which teams you like the most…

What if MLB teams played hockey instead? (Part 6 of 6)
This series was a blast to make tell me your favorite!#Dodgers #Rockies #Dbacks #SFGiants #LetsGoPadres pic.twitter.com/whYavj1aI1

I have to say, I am definitely a big fan of seeing my White Sox as a hockey team. They might actually win something. I’m also really digging the Senators, Pirates, Reds, Cardinals, and Marlins’ hockey kits. You?

Also, being from St. Louis and all, he also designed an alternate/alternate hockey uniform for his beloved Cardinals.

I went with the powder blue Cardinals jerseys in the end, but felt I should post the "Bird on the Stick" version anyway #STLCards pic.twitter.com/LpuDl2R9OQ

I Love these baseball uniform is hockey uniforms for him @Ferry_Designs. Most are good but Astros, Phillies, Yankees, Red Sox, Tigers, Royals, Blue Jays, White Sox stand out. pic.twitter.com/wqf8hDAIVl