New Report Hints That The A’s Could Land On The Las Vegas Strip, Fans React 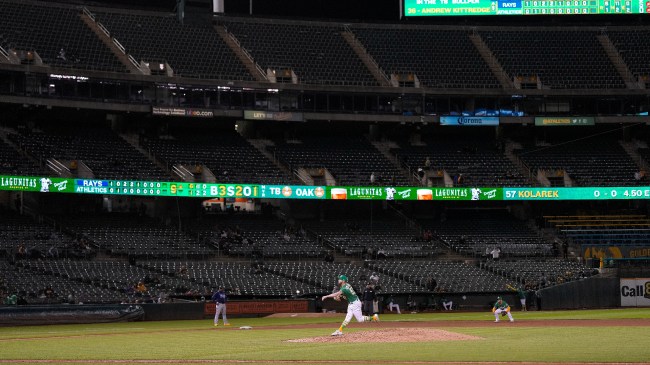 The Oakland A’s are mulling over relocation options as they continue through the 2022 season.

To no one’s surprise, talks of a move come with the club tallying record lows in attendance. In this past series against the Rays, the A’s saw their lowest showing in a game in over four decades.

It’s a theme that’s unfortunately been far too common.

While the organization is looking at options to remain in Oakland, a few legal hurdles need to be cleared in order to build a new stadium. A proposed location on the waterfront would present beautiful views but will also require some changes within the city’s port terminals.

With those talks still in progress, the A’s front office is actively looking to other avenues.

Oakland A’s could end up on the Las Vegas Strip

While the A's options in Oakland are facing obstacles, the club continues to progress on its plans in Las Vegas.

The A's have two spots in mind, including one on the famed Vegas Strip.@owenpoindexter has more ⤵️

There are a pair of Sin City locations being looked at, with one looking very appetizing to ownership.

One of the two Las Vegas options being discussed, according to Front Office Sports, is at the Tropicana hotel location on the Las Vegas strip.

There is reportedly a “very, very strong interest” in the location, which would set the team up in the center of Las Vegas action. Oakland team president Dave Kaval hopes to unveil a $1 billion ballpark design with enough seating for 30,000 viewers.

A’s fans react to the reports

A new Las Vegas Hotel Casino Resort connected to a new MLB Ballpark on Las Vegas Blvd and Tropicana will be a Home Run. #LasVegasAthletics

Professional sports continue be a huge success in Las Vegas. Allegiant Stadium has provided the opportunity for the Pro Bowl, the #NFLDraft and the Super Bowl. A 30,000 seat baseball stadium would be a hit with our 43 million annual tourists. #LasVegasAthletics

This is Raiders to Vegas Part 2… Lots of nice words for the City of Oakland while behind the scenes Vegas was moving forward. After the 2022 season the A's will announce they will be moving to Las Vegas. They will locate on land near the Tropicana Casino.

Time will tell if the A’s make the move to Las Vegas in the very near future, but the city seems bound on adding an MLB club to join its NFL and NHL professional teams. And these new reports hint that it could come sooner rather than later.