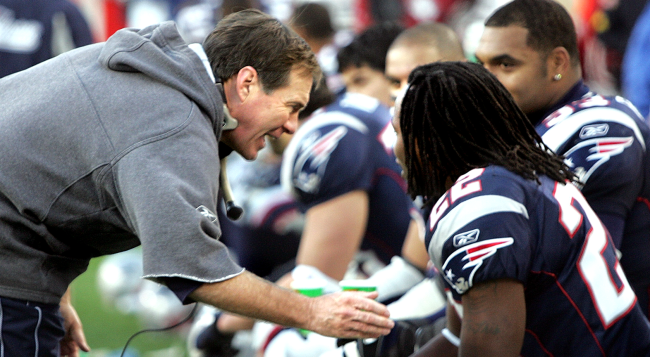 Following the news that Bill Belichick and the New England Patriots had somewhat surprisingly decided to cut quarterback Cam Newton there were some people who expressed dismay with the decision.

While many NFL fans made jokes at Newton’s expense, others, including ESPN’s Louis Riddick and former Patriots cornerback Asante Samuel, reacted a bit more harshly.

“Bill does what Bill does. Right or wrong, the man is cold blooded and will do what he thinks he has to do. Period,” Riddick tweeted about Belichick’s decision to cut Newton loose.

Samuel, who won two Super Bowls with Bill Belichick in New England after being taken by the team in the fourth round of the 2003 NFL Draft, was a bit less diplomatic.

“Cold blooded is a understatement! But without Brady he is just another coach in my opinion,” Samuel responded to Riddick on Twitter.

That statement echoes one that Samuel made about Belichick when Brady made his departure to Tampa Bay official in 2020.

I think Bill Belichick needed Tom to be successful. Do you think Tom needs Bill??? My answer is Nooo. Talk to me

Later on Monday, Samuel tweeted his thoughts about Newton’s replacement in New England, added, “I think Mac Jones will do great. Drafting good players to put around him will be the question.”

Reactions by NFL fans to Asante Samuel’s remarks about Bill Belichick were an interesting mix of anger, bitterness, and even a little support.

Did he coach you to drop that ball in the Super Bowl and cost us the greatest season of all time along with being the only team in NFL history to win 7 Super Bowls?

Remember when you dropped the interception and ruined the undefeated season?

Your opinion stinks. He developed Brady, kept him on the roster as fourth QB his rookie year because he saw something in him, and stuck with him at a time it was not an obvious decision to do so. He completely rebuilt Cleveland, and completely rebuilt the Pats (twice).

Hate all the ppl bashing your tweet. I am a die hard pats fan and I agree with you 100%. The Bill comment is spot on. As spoiled as our fan base has been. We lost big games because of Bill we also lost some because of Brady. Benching Butler though....

He's been a around the league, played for Belichick, played with Brady, And then played against both...I think I know what Asante is saying and it makes sense. Belichick is not the goat coach if Brady doesn't fall into his lap

For the record, Bill Belichick is 25-28 without Tom Brady playing quarterback for him in New England (including going 10-5 with Matt Cassell). The Tampa Bay Buccaneers were 273-433-1 without Brady and 15-5 with him (counting the playoffs). You do the math.