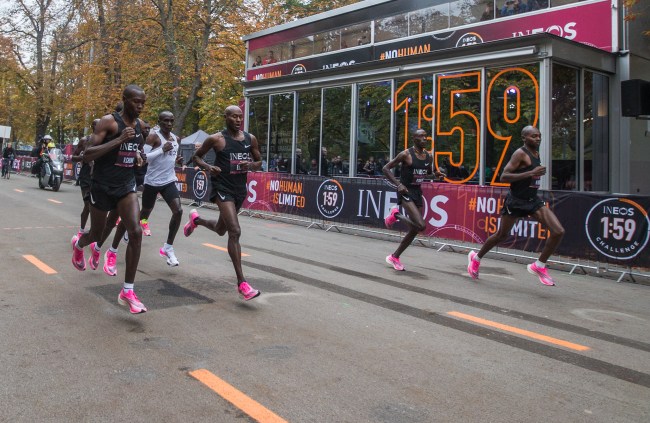 Remember the Beijing Olympics when swimmers were practically running on water in those LZR swimsuits? The suits were so tight that contestants needed friends to help them in and out of them. I always thought that was a weirdly personal process. I can’t imagine my nether regions looking too presentable as they tumble out of my tourniquet trunks after a 200m fly. I’m picturing a mason jar of purple, salted garden slugs—don’t ask. Anyway, the rules committee enacted restrictions after those games because the suits were seen as “technological doping,” especially since some swimmers were doubling up in them for extended pleasure. Ironically, the Japanese team was not allowed to wear them because they were sponsored by [among other brands] Asics. This bears mentioning because, once again, Asics has been totally usurped by technological advances from a competing sportswear brand—this time in the field of marathoning.

177 runners, or almost 85% of competitors, wore the revolutionary Nike sneakers this year. Those wearing Asics trainers slumped from 51 people last year to just 7 this.

“Fool me once, shame on me. Fool me twice, watch my stock plummet.” -Asics

It’s no surprise that Asics is incapable of staying ahead of Nike. The two brands are inexorably linked. Nike was originally founded as Blue Ribbon Sports, meant to be the North American distributing arm for Onitsuka Tiger—the Japanese footwear company that would later merge with GTO and JELENK to form Asics Corp. Nike and BRS would eventually sue each other, but there’s no denying that Nike and Asics have roots on the same family tree. I’ve got three Wikipedia tabs open trying to figure this shit out, but do yourself a favor and read Shoe Dog by Phil Knight. It’s supposed to be a great book about the founding and world domination of Nike.

Today, the story is about the Nike Vaporfly Next%. Hard to believe that % sign isn’t a typo, but here we are. These shoes made waves back in October when Eliud Kipchoge ran a sub-two hour marathon in them—a feat most thought impossible. Almost immediately, shouts of technological doping once again rang out from the crowd of losers who wore tattered Cole Haan moccasins to the race. It seems that whenever a human shatters the expectations of an endurance event, those who wore yesterday’s technology scramble to justify their inferiority.

The number of runners wearing domestic favorite Asics in one of Japan's most-watched road races plummeted from 51 last year to just 7 this year, as Nike Vaporflys continue to obliterate the competition https://t.co/xc9MlgVBPa

Am I the only one who thought that Asics and New Balance were dad shoes until, say, ten years ago when they were miraculously embraced by the streetwear community? I remember seeing limited releases of these shoes at Kith and feeling puzzled. But then again, I’m a pretty fashion-backwards dude. Maybe that’s their lane though: clearly Asics can’t keep up with Nike in an actual road race. Maybe they should fire their entire R&D department and pivot towards the comfortable, untied strolls taken by hype beasts and aspiring white rappers. For admittedly, I’ve often found myself uncomfortably wedged between sizes of Nike’s narrow, running-small athletic shoes. But whenever I slide my dogs into a pair of Asics, I expect a convoy of flashing trucks to escort my wide load feet down the middle of a six-lane highway. Pass me a joint and a walkman, fellow kids; slow and steady wins this race.