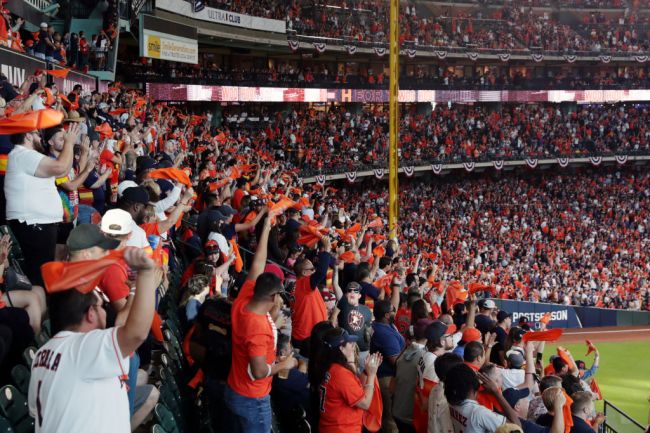 As if Astros fans could get any more unbearable, get a load of this guy.

However, the odds are that this video was taken during this year’s postseason. Probably during Houston’s ALCS against Boston.

And that just makes it so much worse.

To some extent, baseball is a dying sport. Kids these days aren’t getting into America’s favorite pastime the way that they used to and the numbers are there to back it up.

This guy is a big reason why. This (maybe 12-year-old?) fan is standing up, waving his towel, and cheering for his team during a playoff game.

Mind you, the last two home games for Houston have been either a one-run win or a loss. So this young fan is trying to will the ‘Stros to victory.

Instead of encouraging his enthusiasm, or simply — I don’t know, standing up? — this guy taps the excited young man on the shoulder and tells him to sit down.

What a weenie. This guy needs a permanent ban from baseball. Keep him home, where he can remain seated all he wants.

Just look at this guy:

This guy might be the worst person in the world. LOCK HIM UP. pic.twitter.com/6XzOrQQOxo

Sure, I see that this guy is sitting next to a child himself. It might be his own kid and he might be asking the young fan in front of him to sit down so his own kid can see.

Doesn’t matter. Pick your own kid up, throw him on your shoulders, stand him on the folded seat, put him in the aisle.

It doesn’t matter. This guy is simply the worst.