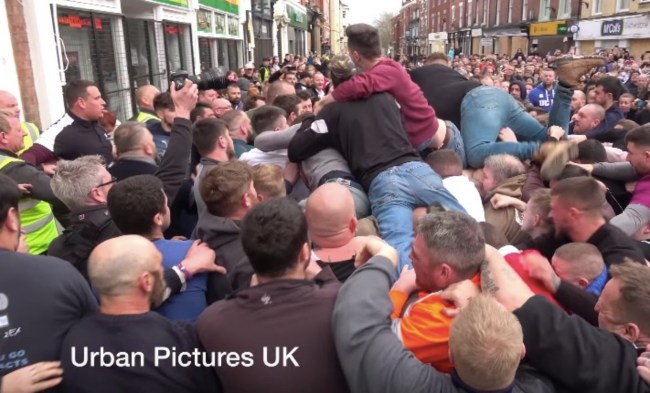 I’m a pretty big fan of peculiar European sports. And by ‘big fan’ I mean I dig these things when I see videos about them on the Internet but have abso-fucking-lutely no clue how any keeps track of this stuff.

My personal favorite is the Cooper’s Hill Cheese-Rolling and Wake in Gloucester but after learning about the annual Atherstone Ball Game I’m kind of on board with this as well. The Atherstone Ball Game is supposed to pay homage to a ‘medieval football’ game between Leicestershire and Warwickshire in the year 1199. Teams used a bag of gold back then as the ball and you can imagine how crazy things got.

This year’s Atherstone Ball Game was the 820th annual event and all hell broke loose with a massive brawl breaking out and punches thrown all over the place. The footage shows what appears to be an unruly mob stuck in a narrow street and torn between guys throwing punches and guys trying to stop other guys from throwing punches.

According to the Birmingham Mail, one of the player’s had his dang ear ripped off during the massive brawl which took place during the English ‘Pancake Day’ football tradition.

The goal of this game is to just hold the ball the longest, and whoever is holding it at 5pm wins. This probably made a lot more sense back in the day when the bag was filled with gold but these days dudes are getting their ears ripped off for holding a ball?!

Former Aston Villa manager Brian Little had this to say about the Atherstone Ball Game:

What an experience that was. I have been to all sorts of sports all over the world and I have never witnessed anything like the Atherstone Ball Game,” he said.
“It’s not a game, it’s not a sport, it’s a brutal, bloody battle that even the mighty Welsh pack would not win! (via)

The violence at this year’s Atherstone Ball Game was apparently so intense the ball broke and it had to be replaced with a spare, according to the Birmingham Mail.