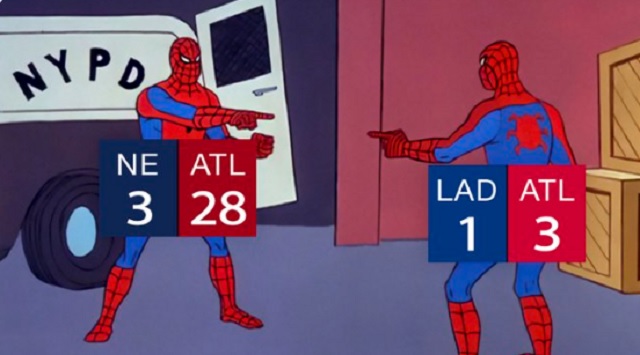 Being a sports fan in Atlanta must be absolutely terrible.

Not only do the Falcons consistently blow leads week in and week out, now the Braves have become the latest Atlanta sports team to choke away a big lead.

On Sunday, the Braves ended up blowing a 3-1 series lead against the Dodgers in the NLCS after losing game 7.

We’ll see you in Texas! pic.twitter.com/K3pP7wyZF5

The Hawks traded away Luka Doncic, the Falcons blew a 28-3 lead in the Super Bowl, now the Braves choke a 3-1 lead to the Dodgers in the NLCS.

Atlanta sports in the playoffs pic.twitter.com/J9CUXN94NX

I personally recommend we treat Atlanta like that episode of Futurama: We move the city out to the Atlantic Ocean and then let it sink.

The Atlanta Braves, a sports team in Georgia, have blown a 3-1 series lead and will not advance to the World Series.

Atlanta fans has been stuck in this entanglement for too damn long. pic.twitter.com/Ve78liCydg

Atlanta sports is next level stuff:

Atlanta sports back on their regular scheduled bullshit pic.twitter.com/rYvSvJUV7Y

If people in Atlanta wanted to give up on sports, I certainly wouldn't blame them.

Atlanta is the city of chokers. pic.twitter.com/jTgc8C9FC3