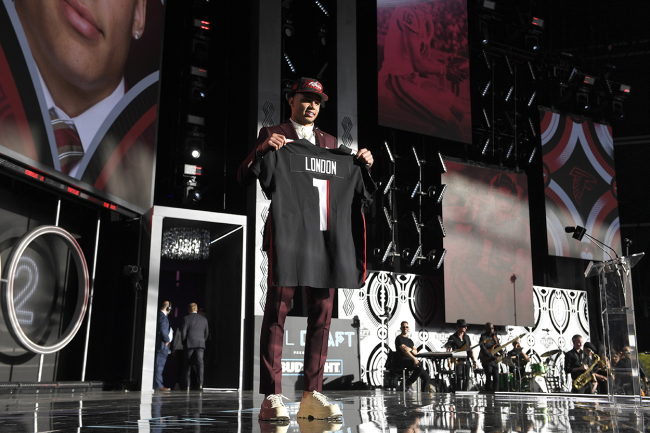 The Falcons’ offense is set to look a lot different in 2022. Included in the transition was an overhaul of the wide receiver room that leaves Atlanta with one of the tallest, if not the tallest corps in the league.

Throughout the entire NFL offseason, there were quite a few blockbuster moves. One of which came with the Falcons’ decision to trade Matt Ryan to Indianapolis.

In turn, the team signed Marcus Mariota and drafted Desmond Ridder out of Cincinnati. Although the former is expected to start this fall, the latter could show out during the summer and win the job.

Either way, the Atlanta Falcons have surrounded their quarterbacks with sky-scraping pass-catchers.

For starters, the team’s starting running back is Cordarrelle Patterson. Patterson stands 6-foot-2, 220 pounds and played wide receiver for the first seven years of his career and in college at Tennessee.

At the receiver position, Atlanta has two players who could work primarily over the middle in Olamide Zaccheaus and Damiere Byrd. Neither of them are taller than 5-foot-9, but that is expected in the slot.

And that’s it. Around them will be a bunch of giants.

To average it out — slot guys aside — the Falcons average 6-foot-3 (and some change) at receiver. Needless to say, outside of the slot position, there is a lot of height in Atlanta.

Whether that will translate to wins in 2022 is yet to be seen, but the Falcons’ front office has put a clear emphasis on big wide receivers who can go up and make a play over defensive backs. That will help either Mariota or Ridder (or both) in the passing game, knowing that they can throw it up and have their guys go up and get it.