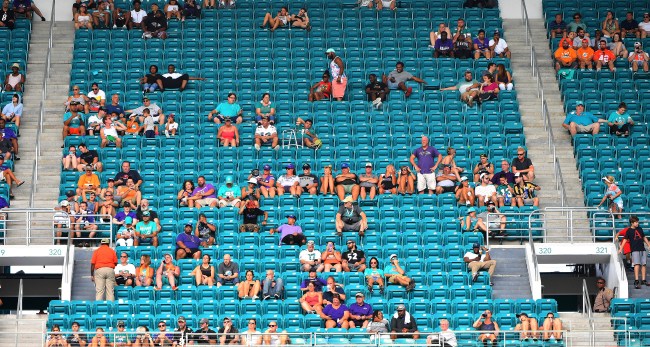 The Los Angeles Chargers had the lowest attendance in the NFL in 2018, averaging just 25,406 fans at their home games held at Dignity Health Sports Park (then known as the StubHub Center). Of course, that stadium only has a capacity of 27,000.

The 2019 Miami Dolphins, who play in the 64,767-capacity Hard Rock Stadium, might end up giving the Chargers a run for their money when it comes to 2019’s worst home attendance in the NFL (at least based on the number of people who actually show up for the games, not bought tickets).

Attendance at the Dolphins game versus the Ravens on Sunday – a 59-10 blowout that had several Miami players reportedly asking to traded – was reportedly 65,012 or 100.4 percent of capacity.

Which is kind of odd considering this is what Hard Rock Stadium looked like during the National Anthem.

Maybe they did, I can hear you saying.

Well, here’s what the stadium looked like at the end of halftime.

Halftime is over and yet still some seats available. pic.twitter.com/bLB1oTW7Dh

Apparently, #TankForTua is not inspiring the Miami faithful.

Not that Dolphins management couldn’t have seen this coming, despite their claims that the team isn’t tanking. A dubious 2015 study by Emory University did determine that Miami football fans are the worst in the NFL.

Meanwhile, over in Cleveland…

Two-minute warning in Cleveland and this place is deserted … pic.twitter.com/LbOLKkVrS5