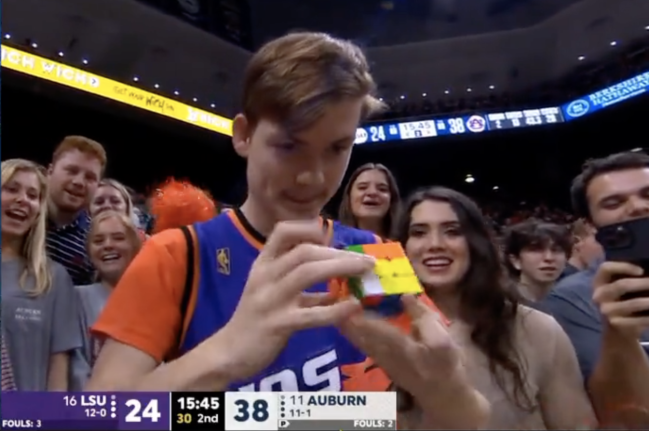 Auburn basketball had major wins both on and off of the court on Thursday night. Not only did the Tigers put a beatdown on the LSU Tigers, but a fan in the student section is forever a legend in east Alabama.

Early in the second half, the ESPN 2 broadcast came back to commercial and keyed-in on a student in the front row. Sporting a Charles Barkley jersey, an Auburn alumnus, the fan held an shuffled-up Rubik’s cube.

When given the go, he proceeded to absolutely annihilate the Rubik’s cube and solved it in 10 seconds. Keep in mind, not only was he solving the cube, but he had the camera right in his face, the eyes of the nation upon him, and anxious eyes all around him.

Despite the added pressure, he took it down and it was exhilarating.

Easily the highlight of the game from Auburn Arena pic.twitter.com/c6mJcUhELp

Despite his impressive performance, somehow, the Charles Barkley impersonator did not even come close to the World Record. The current record held for the fastest solve of a Rubik’s Cube was set by Yungshen Du. He finished the solve in an astonishing 3.47 seconds and beat Feliks Zemdegs’ previous record by 0.75 seconds.

A robot, however, solved a Rubik’s Cube in an incredible 0.38 seconds. That is simply unfair.

Although he didn’t come particularly close to the World Record, the Auburn fan’s performance is arguably more impressive. He did not train for this, was put on the spot on ESPN 2, and sent the crowd into a frenzy. Whoever you are, Charles Barkley Rubik’s Cube solver, I tip my cap.