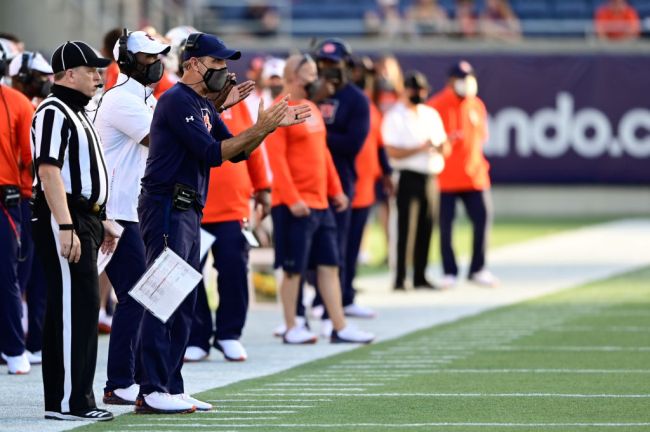 It wasn’t a big shock when Auburn fired former head coach Gus Malzahn in December, but the timing seemed curious considering his $21 million buyout amidst strange, pandemic-hindered season. The Tigers finished at 6-4 in a conference-only schedule and the big question was surrounding the quality of available candidates. 10 days later, the administration put any doubt to rest by hiring a proven winner in Boise State head coach Bryan Harsin. Harsin had a 69-19 record with Broncos.

However, to compete in the Southeastern Conference, it requires not only a good head coach but a strong staff. For Harsin in particular, who is new to the SEC footprint, the assistant coaches around him will be crucial to success. Harsin was given full control of his hires and has made quick work of landing big fish.

The school announced on Thursday that South Carolina offensive coordinator Mike Bobo will serve in the same role at Auburn. He spent last season under Will Muschamp with the Gamecocks and was retained by new coach Shane Beamer in the offseason, but had a change of heart and is on his way to The Plains.

“I’ve wanted to work with Mike now for quite some time as he compliments the many things we want to do with our offense,” Harsin said. “We are going to be very versatile in what we do and Mike’s offensive background speaks for itself. I’m really excited to combine forces with Mike as we create the Auburn offense, a high-powered, attacking and physical unit that will come at you in many ways.”

Bobo previously served as Colorado State’s head coach from 2015-19 after spending 12 years on Mark Richt’s staff at Georgia, first as a quarterback coach and then as the offensive coordinator. He played the position for the Bulldogs during the mid-to-late 1990s.

The Bulldogs went into Jordan-Hare Stadium and beat the Tigers in the first overtime game in SEC history. Corey Allen caught a 30-yard touchdown pass from Mike Bobo on the last play in regulation to tie the score at 28-28.#GoDawgs pic.twitter.com/pnqpuTxhlc

This hire is a big deal because of his ability to develop quarterbacks— something that Auburn struggled with under Malzahn. While in Athens, Bobo worked with David Greene, D.J. Shockley, Matt Stafford and Aaron Murray, among others. He will take over an offense that seems like a few minor adjustments away from success with rising junior Bo Nix at the helm. Nix committed to Auburn as a five-star recruit and was the top duel-threat quarterback in the 2019 class. He was named SEC Freshman of the Year in 2019 and makes plays, but has struggled with his decision-making and how he uses his arm. Bobo will help with that.

Reports are circulating that Harsin and the university is soon to hire another former head coach on the defensive side of the ball. Per AL.com, Auburn will be announcing Derek Mason as its next defensive coordinator. Having led an under-funded Vanderbilt program from 2014-20, Mason knows the ins-and-outs of the SEC and led the Commodores to two of their six seasons with six wins or more since 1982. He is a well-respected defensive mind that led Stanford to No. 1 and No. 1 total defense rankings in 2012 and 2013 prior to heading south.

Mason had an uphill battle at a program that takes the field every week with a significant talent gap in comparison to its opponents and took a significant interest in the defense. The 51-year-old took over the defensive play-calling duties in 2015 and allowed just 350.5 yards and 21 points per game that season. With how bad Vanderbilt is, those numbers are impressive. Auburn allowed 24.7 points and 406 yards per game in 2020, to compare. Having Mason (who is extremely likable amongst fans and media alike) focus strictly on the defense is a great hire at a school that expects a lot from its coaches.

Harsin is assembling himself a great supporting cast that can handle their respective positions with confidence. As a first-year head coach in the top division in college football, that experience around him will be important. He inherits a below-average recruiting class due to Malzahn’s late firing and it takes time to build a a program. But that’s what Harsin does and if his staff is any indication, he is well on his way.