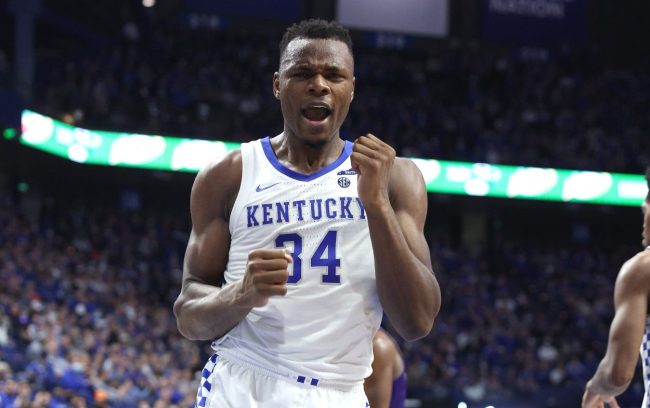 With just under 24 hours until tipoff, Auburn fans are making a huge deal about the upcoming basketball game against Kentucky. Unfortunately, the Tigers do not stand a chance after a recent quote from Wildcats forward Oscar Tshiebwe.

Saturday’s SEC matchup pits No. 12 Kentucky against No. 2 Auburn. The Tigers would and should be the No. 1 team in the nation, but got screwed by one specific college basketball writer. Regardless of their ranking, they host John Calipari and the Wildcats in one of the biggest regular season games in the program’s history.

Tickets are in such high demand, particularly for students, that fans began to gather outside of Auburn Arena more than 24 hours before tipoff. They brought tents and sleeping necessities with plans to stay the night.

The temperature is going to drop down below freezing overnight and it’s going to be cold, but the dedication is extremely impressive.

Conditions: 37 degrees, rain expected in the next hour.

And the tent city only continues to grow.

A small community has formed outside of Auburn Arena. Students are doing homework, on Zoom, crushing Chik Fil A. Somebody is playing Pushin P. 24 hours to tip. 37 degrees outside. pic.twitter.com/fQvV62XK5P

While the desire to be in the building for the game is admirable, the effort will soon be proved futile.

Kentucky is willing to die to win.

The Wildcats’ Congolese forward Oscar Tshiebwe, who stands a frightening 6-foot-9, 255 pounds, recently spoke about the upcoming game. He declared that his team is willing to put their life on the line for a dub and compared the matchup to war.

The Tigers will try to get one win closer, but if Tshiebwe’s mindset is any indication, the Wildcats are ready to humble their blazing hot opponents on their home court. If I was Auburn, I would not want to get in Tshiebwe’s way.