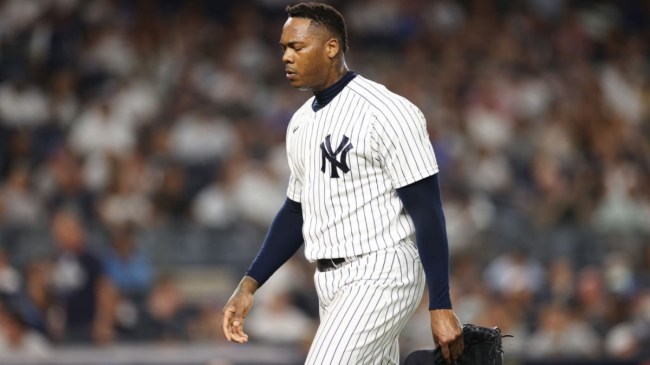 The month of August has been absolutely brutal for the New York Yankees.

The Yankees headed into the All-Star break as one of baseball’s best offenses and with a solid lead for the MLB’s best record. Since then, the bats have gone cold and the Yankees have fallen behind the Dodgers, Astros, and Mets in the race for the league’s top spot. They have also let their division back in the race for the AL East title.

That slide in the league standings comes as the result of a 9-14 run through the month of August.

To make matters worse, the team also recently had Nestor Cortes head to the 15-day IL. Now it’s being reported that another key Yankees pitcher will be joining him.

New York Yankees manager Aaron Boone revealed today that Aroldis Chapman will be heading to IL because of an infection in his leg. The infection apparently stemmed from Chapman getting a tattoo.

Chapman is going on the IL with an infection in his leg, Boone said. It stemmed from getting a tattoo.

This is a pretty incredible reason to have to head to IL as your team tries to stop their slide and fight for home-field advantage in the playoffs.

Chapman entered this season having spent recent years as the Yankees’ closer and one of the most reliable arms in their bullpen. That hasn’t quite been the case this season as his ERA has risen to 4.70 this season and he has only been given 9 save opportunities this season.

Now he will be unavailable for the Yankees for at least the next couple of weeks as he recovers from this infection.

Maybe by the time he returns the Yankees will have figured out what has been causing their bullpen’s recent struggles.