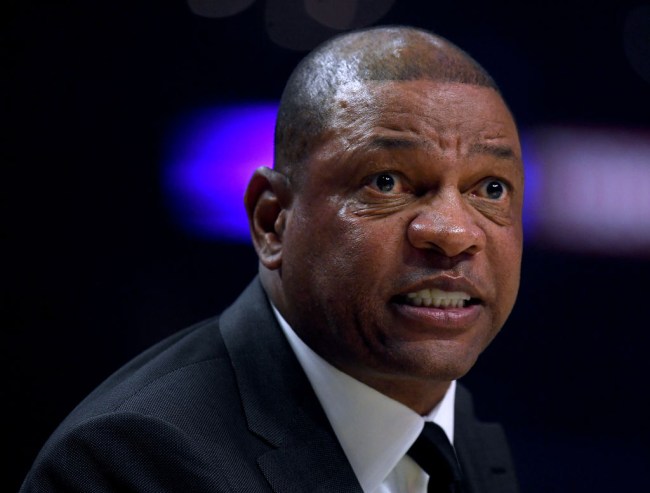 Austin Rivers played for three seasons with the Clippers under the watch of his dad Doc before deciding to take his talents elsewhere, and after a brief stint with the Wizards, he opted to sign a contract with the Rockets last year.

On Wednesday, the elder Rivers found himself facing off against his son when Los Angeles traveled to Houston, where the Clippers would ultimately fall by a score of 102-93.

The Rockets jumped out to an early lead but the Clippers managed to crawl their way back to gain the advantage in the fourth quarter before things started to fall apart and found themselves trailing by eight points with around a minute-and-a-half remaining in the game, which is when Doc decided to go after the refs for reasons that weren’t entirely clear.

As the coach got increasingly heated, Austin enthusiastically encouraged the officials to give his dad a technical and saw his wishes come true when Doc was ejected from the game—a development that caused his son to wave him off of the court.

Austin Rivers wanted the refs to give his dad a tech 🤣 pic.twitter.com/zKRHXf2PYQ

Austin was asked about the moment after the game and revealed what he said to the refs before admitting the ejection gave him a fair amount of joy:

He also hopped on Twitter to joke about the incident and predicted the holidays may be a bit awkward.

Welp…. thanksgiving is going to be weird….