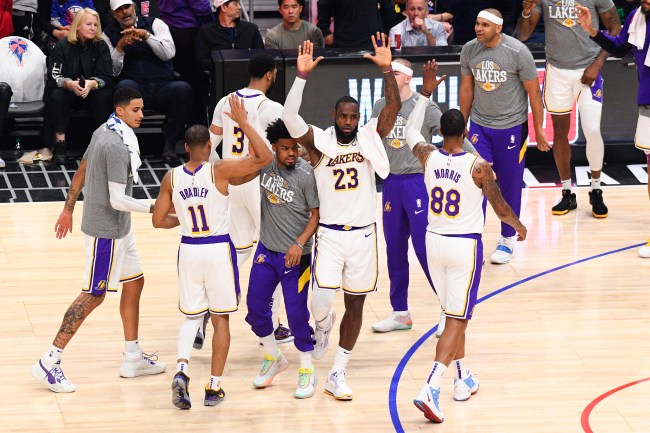 On Friday night, in a call organized by Kyrie Irving, several NBA players voiced their opinions on possibly sitting out the upcoming season due to racial tensions in the country.

According to The Athletic’s Shams Charania, Lakers veterans Avery Bradley and Dwight Howard were among those pushing to sit out the season to allow for the Black Lives Matters protest to continue without a distraction.

Sources tell The Athletic that a group consisting of 80-plus players — including NBPA vice president Kyrie Irving, NBPA president Chris Paul, Kevin Durant, Carmelo Anthony, Dwight Howard, Donovan Mitchell and Avery Bradley — discussed finding unity and a way to attack a cause amid the nationwide unrest stemming from racial injustice, systematic racism and police brutality as well as what the world continues to face during the coronavirus pandemic.

Bradley, the Lakers guard, was the second person to speak on the call after Irving and was vocal throughout, urging players to take a stand and utilize this moment to “play chess, not checkers,” those sources said.

Howard stressed to players that playing in Orlando will become a distraction from the issues the country is facing, and that they need to unify and use this moment to create a change.

While LeBron James didn’t participate in the call, Sam Amick is reporting that LeBron insists that he wants to play out the season because he feels that he can still play basketball and advocate for change in the country at the same time.

Some of us want to hoop and compete don’t get that twisted…. https://t.co/GoRnvy6rzN

As of now, it appears that the season is going to continue to take place as planned despite the concerns of certain players.