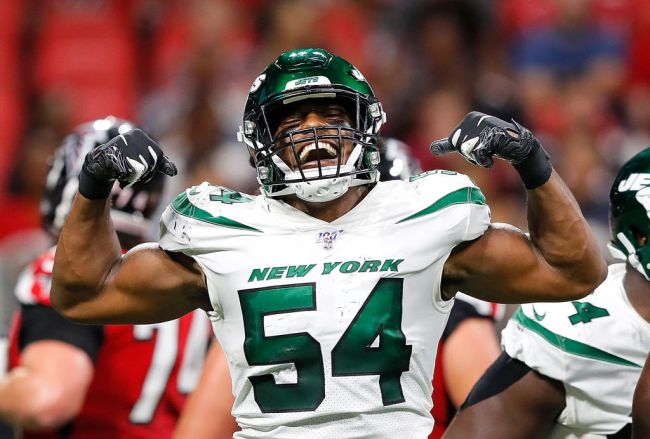 Avery Willamson is excited to no longer be a New York Jet and you certainly can’t blame him. Being dealt from the only winless team in the NFL to the Steelers, the only unbeaten team still standing, has to be a giant breath of fresh air for the linebacker.

According to reports, the Steelers received Williamson and a Jets’ seventh-round pick in 2022 in exchange for a fifth-round 2022 pick from Pittsburgh.

The trade was made on Sunday night shortly after the Jets were annihilated by the Chiefs 35-9. Williamson was so excited about getting out of New York that he didn’t even bother taking off his uniform before asking for a ride out of Manhattan.

Now that, my friends, is how you react to being traded from the worst team in the NFL.

I like to imagine he jumped on the subway in full pads, got off at the Fulton Center stop, bought that umbrella for $22 when it’s worth no more than 22 cents, and got someone to take this photo for him.

Williamson, a fifth-round draft pick out of Kentucky in 2014, spent his first four seasons in the league with the Titans and the last two with the Jets. He’s made 59 tackles and picked off one pass in seven games in 2020.