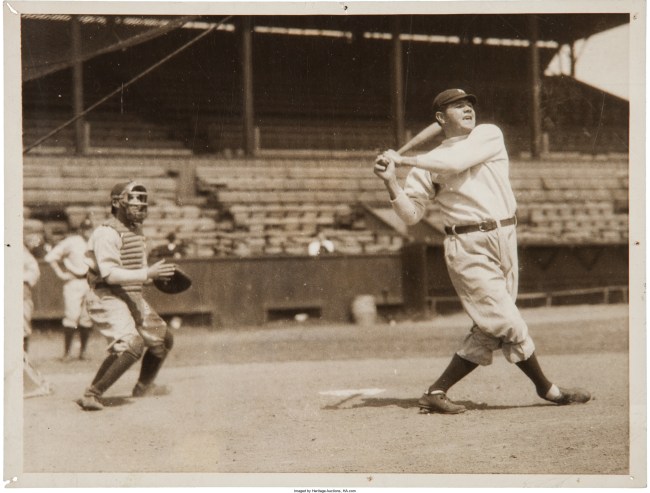 Babe Ruth aka The Great Bambino aka The Caliph of Clout aka the Sultan of Swat is considered to be the greatest baseball player in history. There’s a lot of modern debate about how Babe Ruth would fare in modern baseball and if he’d even be able to make a professional team with how much the game has changed but that’s neither here nor there because in his heyday Babe Ruth was the GOAT.

Just in case you need a quick refresher on how incredible Babe Ruth’s career was compared to his contemporaries, here’s a synopsis of his time playing baseball taken from the auction’s landing page:

Babe Ruth ascended to the highest pinnacle in the sport of baseball from humble beginnings as a troubled young boy who entered St. Mary’s Industrial School for Boys at the age of 7. Ruth quickly became noticed as an outstanding young player under the guidance of Brother Mathias Boutlier and was signed by Baltimore Orioles owner, Jack Dunn, in 1914. After brief Minor League stints with Baltimore and Providence clubs, Babe Ruth began his Major League Baseball career with the Boston Red Sox. Ruth would go on to play for 22 years primarily with the Red Sox and famously the New York Yankees after a sale to the team in 1920. His acumen as a dominant pitcher and penchant to hit tape measure home runs quite literally changed the manner in which the game was played. Babe would end his career in 1935 with statistics and a resume that had not previously been seen in the game of baseball: 714 Home Runs, .342 batting average, 2,213 Runs Batted In, Seven Time World Champion, 12 Time AL Home Run leader, and election into the inaugural class of the Baseball Hall of Fame in 1936.

The Great Bambino has been dead for 71 years. He passed away on August 16, 1948 in NYC at the age of 53 but his legacy has lived on forever. Babe Ruth sports memorabilia fetches crazy sums of money at auction with people spending $$$$$ on baseball cards, autographs, etc.

One such item that will soon hit the auction block is expected to set a new world record for sports memorabilia and could fetch up to FOUR MILLION DOLLARS at auction. That item is a game-worn jersey that Babe Ruth wore sometime between 1928 and 1930.

The collection from Hunt Auctions is titled ‘The Personal Collection of Babe Ruth at Public Auction’ and other items in the collection include his game-worn cleats, autographs, photos, and more. You can check out the full collection here.

This live auction will take place on Saturday, June 15th at Yankee Stadium in The Bronx with a portion of all the proceeds going to various charities:

Hunt Auctions is honored to announce a highly significant offering of historic baseball artifacts and personal materials from the collection of New York Yankees’ legend, Babe Ruth. The collection has largely remained unknown to the general public and includes hundreds of pieces relating to the life and career of the most iconic player in the history of the game.

The live auction will take place at Yankee Stadium on June 15, 2019 with a number of additional special advance preview events in planning. Fittingly for an auction celebrating the life and legacy of Babe Ruth, a portion of the proceeds will benefit several related charities.

If you’ve got a few million dollars laying around and are a massive Babe Ruth fan then you can click here to check out the Hunt Auctions’ landing page for this collection and you’ll want to plan on being in The Bronx on June 15th for this auction.

The Yankees will be on the road that day playing the White Sox in Chicago where games are selling for only $14 right now which might be a better use of your money than spending $4 million on a dead guy’s outfit but I’m not here to judge you for how you choose to spend your money.

This all reminds me of the time Charlie Sheen made A DAMN FORTUNE selling his Babe Ruth memorabilia.