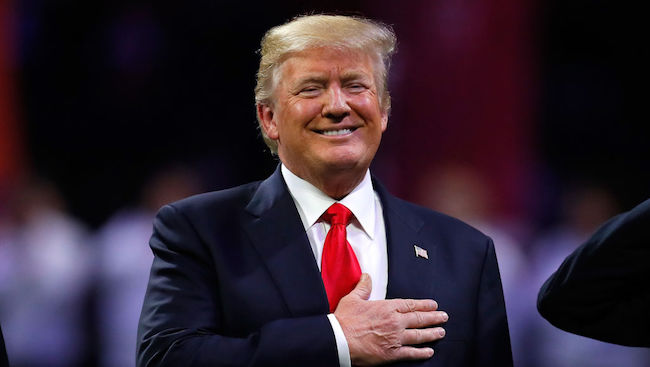 Donald Trump decided to make an appearance at last night’s College Football Playoff Championship Game in Atlanta and didn’t exactly receive the warmest of welcomes. His arrival at the game was met with a loud chorus of boos, protesters projected “Fuck Trump” on the side of Mercedes-Benz Stadium, and Alabama running back Bo Scarbrough appeared to yell the same sentiment while walking through the tunnel on his way to the field (although he claims the Georgia squad was actually the target of his ire).

However, the biggest “scandal” of the night (aside from some questionable officiating) came during the National Anthem. Trump was a vocal critic of NFL players who opted to kneel during the anthem over the course of the season and Mike Pence even “decided” to leave an Indianapolis Colts game in protest in October in what ultimately appeared to be a pre-planned stunt.

When you consider how much deference Trump seems to have for the anthem, you’d think he’d at least have the words memorized just like every fan who has attended more than five sporting events in their life. However, plenty of people have pointed out it didn’t appear Trump knew the lyrics at all.

The folks at Bad Lip Reading decided to take a closer look at the clip in an attempt to reveal what Trump was actually saying, which turns out to be eerily similar to what you’d expect to come out of Dave Matthews’ mouth when he’s scatting during a live performance of “Jimi Thing.”

I have no doubt this video will spark a great deal of very rational and polite political discourse.