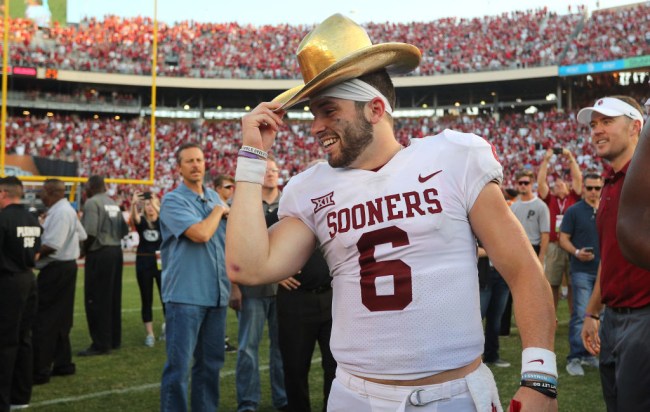 Baker Mayfield might not want to be compared to Johnny Manziel, but he hasn’t done himself any favors with his behavior on the gridiron in addition to some off-the-field incidents that resulted in an NFL team hiring a private detective to trail him as part of their evaluation process. Tonight, the former Oklahoma Sooner will find himself in the same precarious position Johnny Football was in four years ago: facing the dreaded prospect of being drafted by the Cleveland Browns, the team where quarterbacks go to die.

Unless something goes horribly wrong, Mayfield shouldn’t have to wait too long to hear his name get called after the NFL Draft kicks off. I’m not sure how I’d handle the stress that comes with knowing you stand to lose millions of dollars every time your name isn’t called, but it looks like the quarterback is managing to have a pretty good time leading up to tonight’s event.

Mayfield recruited some of his entourage to help him recreate Brett Favre’s iconic draft photo from 1991— a picture that sums up the earlier part of the decade better than words ever could. While it would have been easy to half-ass this, everyone went the extra mile when it came down to some of the smallest details— including an old-school cellphone and a damn fine pair of jorts.

Is the Cavs sign over the door really a subliminal message to get the Browns to draft him? Probably not, but I doubt that’s going to stop people from reading way too far into it.

The tweet comes just a couple of days after Mayfield hung up on Favre’s former agent for a very good reason, so while they might lack the same representation, I’m sure the soon-to-be draftee wouldn’t mind having a similar reputation by the time he wraps up his career.