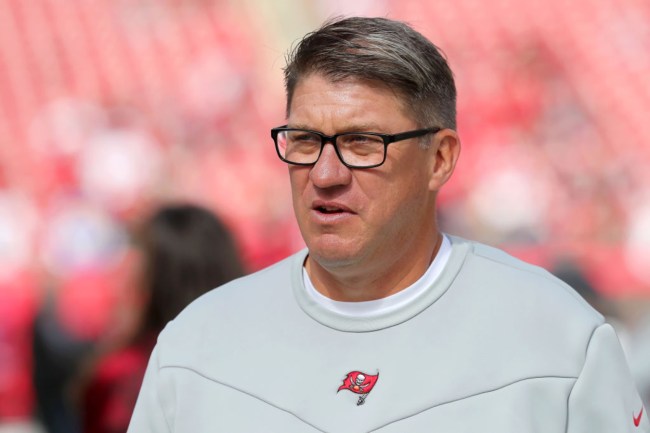 The Tampa Bay Buccaneers have no worries when it comes to who their starting quarterback will be this season thanks to Tom Brady un-retiring. The same can’t be said for the backup QB position in Tampa Bay, and some are suggesting the Bucs make a move for Baker Mayfield to fill that void.

Former NFL QB turned ESPN analyst Dan Orlovsky suggested that the Bucs trade for Mayfield earlier in the week. Since then, that idea has done nothing but pick up steam.

The folks over at ‘Mad Dog Sports Radio‘ have certainly heard the Mayfield to Tampa Bay rumors so they decided to ask general manager Jason Licht for his thoughts on the idea.

Licht didn’t exactly shoot down the idea, that’s for sure.

“I don’t want to talk about a player that’s on another team’s roster right now, but we may still add a veteran quarterback,” Licht explained. “We’re going to have to see how it goes here.”

"I don't want to talk about a player that's on another team's roster right now, but we may still add a veteran quarterback. We're going to have to see how it goes here."@AdamSchein asked #Bucs GM Jason Licht about adding a veteran backup QB, specifically Baker Mayfield. pic.twitter.com/rQaVZLVLjR

As it stands right now, Kyle Trask will be the No. 2 QB behind Brady next season. While Licht explained that he likes Trask’s development, he didn’t shut the door on adding someone else to the QB room in Tampa.

“Kyle is somebody that we’ve been really excited about, and his progression last year, as a backup quarterback, just learning behind Tom, learning behind Blaine,” Licht said.

“We’re really excited about him and I think he’s just going to continue to develop. We had Blaine last year on our roster, and that could be a possibility still. We’re still checking out the entire market here, and we’ll see what happens here.”

It’s hard to imagine Mayfield would be accepting of being dealt to a team where he’d be the backup QB, but there are certainly worse spots to be in.

At the end of the day, the list of teams in need of a quarterback is dwindling, Mayfield may have to take what he can get.