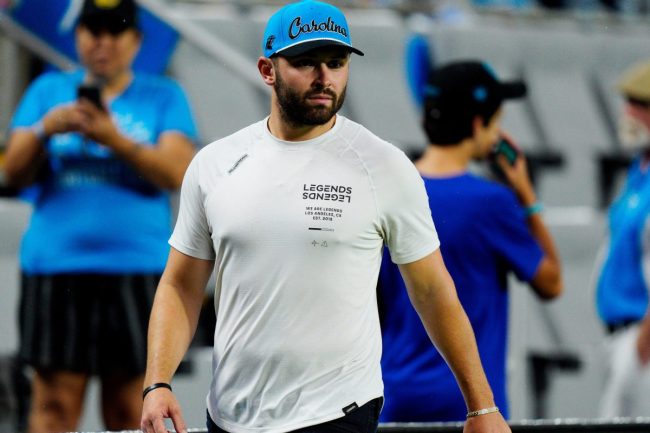 The Panthers have arrived at training camp, and new quarterback Baker Mayfield will certainly be under the spotlight. Carolina traded for the gunslinger earlier this month setting up a competition under center.

Many believe the job to be Mayfield’s, which would set up an interesting first week battle as the Panthers host his former team, the Browns, in Charlotte. But last year’s starter Sam Darnold will have something to say about that.

Darnold began the year under center in Carolina last season, starting 11 games and posting a 4-7 overall record. He completed just under 60% of his passes while throwing for 2,500 yards, nine scores, and 13 interceptions. Despite the poor play, Panthers’ head coach Matt Rhule opted to keep him on the roster, and he believes that an offense can be built around the passer.

That confidence was somewhat combatted with the signing of Mayfield, though the newcomer is far from being named the starter.

He, too, is coming off of a rocky year where he battled through injury and limped to a 6-8 record over 14 starts. Mayfield had surgery on his shoulder before the year was done, which had teams weary when the discussing potential trades. The Panthers took a flyer, and they’re hoping it pays off in a big way.

Mayfield arrived today alongside defensive leader Shaq Thompson. Fans seem excited to have the signal caller on the roster. Many Panthers, dare I say, are feeling dangerous.

For better or worse. I'm at the point in my life where watching Baker walk gets me pumped https://t.co/CgKe3VZjHW

But fans weren’t the only ones weighing in on the arrival.

Sam Darnold details his relationship with Baker Mayfield ahead of camp

Mayfield’s competition in the quarterback room gave his thoughts on the gunslinger, detailing his relationship with his new teammate.

Sam Darnold: “Me and Baker are cool.” pic.twitter.com/FJcIQAIW4W

“Me and Baker are cool. I’m sure competing when things start rolling in training camp, it’s going to be fun. We’re going to be able to compete and have fun with it, but at the end of the day, this is a business. We both take our craft and what we do very seriously… But off the field, me and Baker are really cool.”

There appears to be no animosity in the QB room with training camp gearing up. The two gunslingers will battle it out over the coming month for a chance to earn that opening day start in Bank of America Stadium.