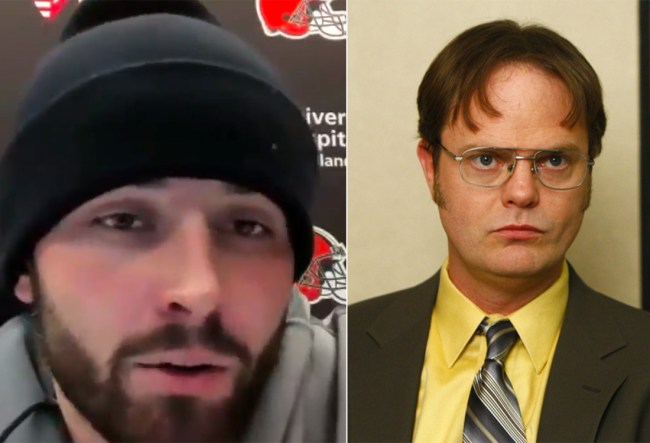 The Cleveland Browns are 9-3. Let that sink in for a minute.

After a 41-35 win over the Tennessee Titans on Sunday, the Browns assured themselves their first winning season since 2007.

Browns quarterback Baker Mayfield had arguably his best game of the season, finishing with 25-of-33 passing for 334 yards with 4 touchdowns. His passer rating was a ridiculous 147.0.

To cement the impressive day, Mayfield dropped the perfect quote into his postgame press conference when asked about his “growth” this season.

“Whenever I’m about to do something, I think to myself, ‘Would an idiot do that?‘ And if they would, then I don’t do that,” Mayfield told Mary Kay Cabot of Cleveland.com.

The line comes right from the most inspirational character in TV history, Dwight Schrute from “The Office.”

“Just realized what I’m capable of,” Mayfield went on to explain to Cabot. “That’s how I need to do it.”