Baker Mayfield Shuts Down Ridiculous Pressure Put On Him And Panthers Ahead Of Matchup Vs. The Browns 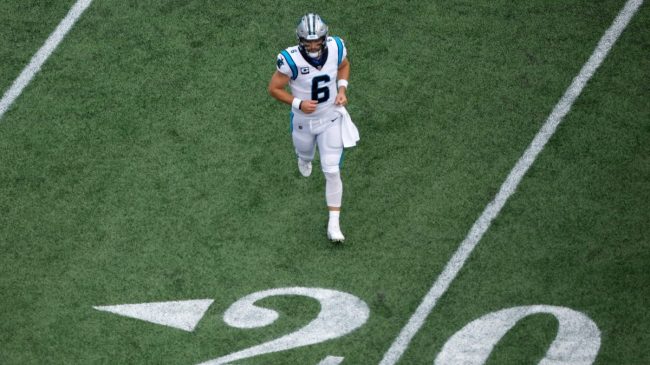 The Carolina Panthers got off to a slow start but nearly made a comeback to steal a win away from the Cleveland Browns. There was a ton of hype surrounding this matchup though. Especially considering Baker Mayfield was facing his former team. However, that hype might have been unwarranted and that’s exactly what the Panthers quarterback points out.

According to Sports Illustrated, Mayfield put on a solid performance for his debut. Although the first half didn’t go the way he would have hoped, he still looked great for the Panthers’ first game. However, Baker Mayfield had some choice words regarding the hype that was built up leading up to the season opener.

“Everybody made this out to be the Super Bowl, but despite what everybody’s gonna make of this, there’s 16 more games. The Super Bowl’s not until February, this is the beginning of September.”

Baker Mayfield has a point. Everyone hyped this Panthers-Browns game up like crazy. Of course, he played against his former team and there was a storyline there. However, Mayfield downplayed it any chance he could get. The game wasn’t about him vs. Cleveland, it was about Carolina doing everything possible to earn a victory in Week 1.

The hype got so out of hand at one point, that Baker Mayfield called out a media member for possibly making up quotes. So, although the storylines may add up, it doesn’t technically mean it’s true. We’ll see how the Panthers respond in Week 2, as they prepare to face off against the New York Giants.