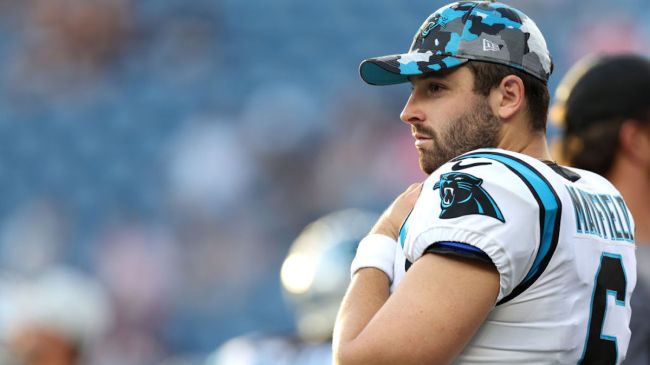 Earlier this week, we brought you the story of NFL fans reacting to reports that former quarterback Baker Mayfield — who will be starting for the Carolina Panthers when the two teams face off during Week 1 — apparently said he wants to “f*** up” the Cleveland Browns. The Browns, of course, drafted Mayfield with the #1 overall pick in the 2018 Draft before acquiring Deshaun Watson and shipping Mayfield out of town.

“I’m going to fuck them up” – baker mayfield on week 1 vs #browns pic.twitter.com/xoeZ296WQw

Mayfield, however, has since denied those reports, telling the media that he never said anything of the sort.

“First, I didn’t say it. Everybody is going to write whatever story they want. There’s history because I played there the last four years. I’m an extremely competitive person. Everybody knows that. If I wasn’t wanting to win, then there would be a really big issue of me being the quarterback here,” Mayfield told reporters.

“I want to win in everything I do. That’ll never change. But it’s not how I phrased it. It’s not even what I said, so let’s leave it at that.” [via ESPN]

However, following Mayfield’s denial, Cynthia Frelund — the NFL Network analyst who originally reported Mayfield’s alleged comments about his former employers — is standing by her reporting, albeit with a bit of a caveat.

Frelund shared on the podcast and repeated to ESPN.com that she talked to Mayfield after the Panthers’ 21-0 victory and said that Mayfield repeated her words when she playfully told him to “f— them up.”

“He echoed it back. It was very innocuous on his part. The tone was gracious and happy and excited,” Frelund told ESPN.

Despite the public jousting over the validity of Mayfield’s comments, Frelund says she reached out to Mayfield to apologize as she “shouldn’t have shared a private conversation.”

As mentioned above, Mayfield and the Panthers will kick off their 2022 season against the Cleveland Browns on Sunday, September 11. The Browns, however, will be without the services of Deshaun Watson, who will be serving the first game of his 11-game suspension.

RELATED: Sam Darnold Reacts To Being Traded To Carolina Just To Lose His Job To A Fellow 1st Round Bust Baker Mayfield