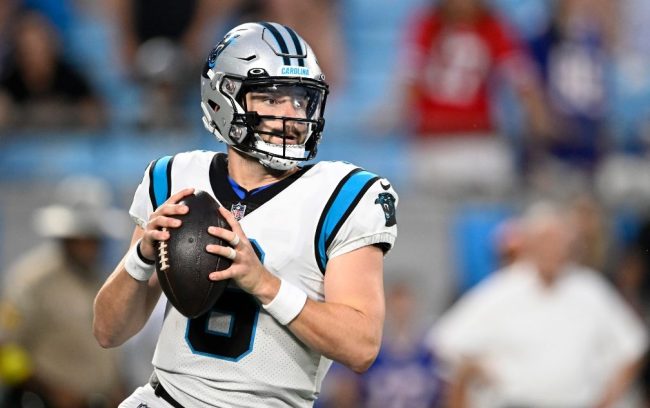 Everyone knows the story of how the Cleveland Browns pushed Baker Mayfield to the side so they could acquire Deshaun Watson. It was wild to see, as a franchise clearly desperate for success treated their former quarterback poorly in the final months. However, it sounds like the Carolina Panthers have a fired-up quarterback under center, as Mayfield is out for blood for the season opener.

Baker Mayfield Wants All The Smoke In The Panthers Season Opener

According to Mary Kay Cabot, Baker Mayfield is out for blood, as he claims, “I’m going to f*** them up,” when discussing the Browns. This is the type of fire the Panthers need at quarterback, as Mayfield’s competitiveness can help this team become a potential playoff contender.

Remember when Baker Mayfield planted the flag in the middle of Ohio State’s field? That might be what Carolina is getting in the season opener. Also, remember when he continuously taunted Kansas and crotch-grabbed them on the sidelines all because they didn’t shake his hand? We might get a double-dose of old-school Mayfield for the Panthers-Browns opener.

We can only hope that’s the case. After the way Cleveland treated him, we can’t help but back him up and hope he puts up 753 yards and 10 touchdowns. That’s probably a bit unrealistic, but as they say, shoot for the stars and you’ll land on the moon… Or something like that.

At the end of the day, this Panthers-Browns season opener is going to be heavily watched. If Baker Mayfield goes bonkers he might just break the internet. Hopefully, he gets to f**** up Cleveland to start the year.