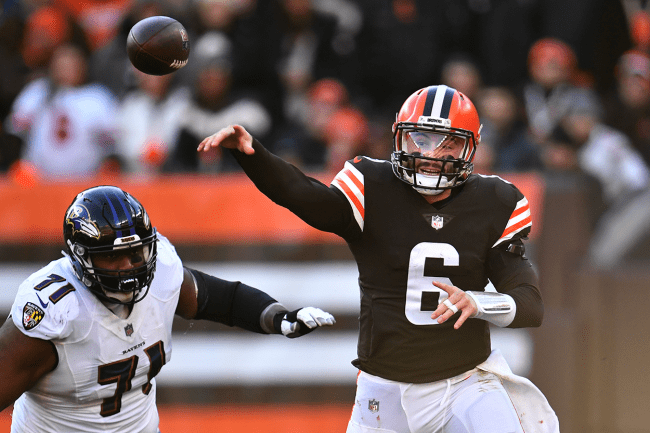 Baker Mayfield’s future in the NFL is very much up in the air. He is currently a part of the Cleveland Browns organization, but the team just traded for Deshaun Watson and signed Jacoby Brissett.

As a result, Mayfield is the odd man out and wants to be traded. But nobody wants to trade for him.

That leaves him and the Browns in quite the predicament. Do they trade him for less than he is worth? Will Cleveland agree to take on a large part of Mayfield’s salary in order to deal him? Might the team just sit tight and wait?

While there is no denying that part (if not most) of the Browns’ failures are because of how the team is run, Mayfield had a strong supporting cast around him in each of the last two seasons. And yet, the deep playoff runs just have not followed.

Mayfield has said before that he hears the doubt and uses it as motivation.

And now Baker Mayfield is putting in the work with a new coach to try and change things up in 2022.

According to Pro Football Network’s Tony Pauline, Mayfield has a new person helping him to get better. He is spending the offseason improving his mechanics and throwing motion with Jeff Christensen, who also works with Patrick Mahomes.

On the latest episode of Draft Insiders, @TonyPauline revealed that Baker Mayfield is currently working with Patrick Mahomes' QB coach (Jeff Christensen) to improve his mechanics and throwing motion.

Mahomes is, obviously, considered the prototypical “modern day” quarterback with his ability to make plays with both his arm and his legs. Mayfield isn’t quite Mahomes, and the two are obviously very different in a lot of ways, but they are similar in the way that they can turn chaos into success, if you will.

If Mayfield is able to improve his arm angle, release point and quickness, that would be the next step forward. Perhaps Christensen can help him get it done?