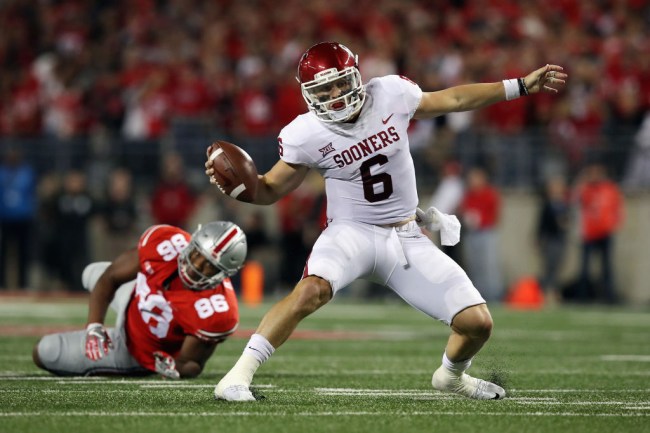 Consider me firmly on the Baker Mayfield bandwagon. Before the season started I was rather ambivalent about him. Sure he has a very good track record when it comes to football and girlfriends, but what QB1 at a major football school doesn’t?

His getting tackled by the cops after trying to run away before eventually being booked for public intoxication and resisting arrest had me wondering if he would have any future in football after college.

Now, however, I am firmly rooting for him to make to the NFL because, as evidenced by his planting the OU flag right on the Ohio State logo on Saturday, bro has swag for days.

Unfortunately, on Monday Mayfield apologized and as I suspected it was not something that he did voluntarily. At least not according to an interview he did on Tuesday with Rich Eisen.

“I think I actually caught more flack from Oklahoma fans after I apologized than people in Ohio,” recalled Mayfield.

“I mean it wasn’t meant to be disrespectful towards Ohio State…no, I wouldn’t take it back,” he continued. “It was meant to be just for our team and a statement for us.”

You know what else is awesome? Oklahoma fans and Ohio State fans have been waging a war on Wikipedia as to who actually owns Ohio Stadium. In fact, it’s gotten so crazy that even Siri is now officially confused.

Baker Mayfield is listed as the owner of Ohio Stadium on Wiki right now ☠️☠️☠️ pic.twitter.com/8twoTUSBsH

You know what else is also awesome (if true)? This story of how Baker Mayfield was calling his shots at some drunk Ohio State fans during the game on Saturday…

According to ESPN’s “Freddie and Fitz” the monstrous second half was motivated by some drunk, trash-talking Ohio State fans who finally got into Mayfield’s head.

On Tuesday, Ian Fitzsimmons said that at the start of the second half, Mayfield lost it with the fans and told them he was going to lead Oklahoma to a comeback.

“There were a group of Buckeye fans that were beyond over-served,” Fitzsimmons said, adding, “these guys are just wearing [Mayfield] out.”

He continued: “[Mayfield] turns around and goes ‘Get ready, I’m about to hang six on you bleeping bleepers.’ He goes, leads them right down the field. Score’s tied at 10 and he goes right to the bench, stands up on the bench, and just lets the Buckeyes fans behind him that were giving to Baker, he turns at them and says, ‘You like that one? I got three or four more that’s coming up. Get ready.'”

Mayfield then continued to throw two more touchdowns and the Sooners took the 31-16 victory.