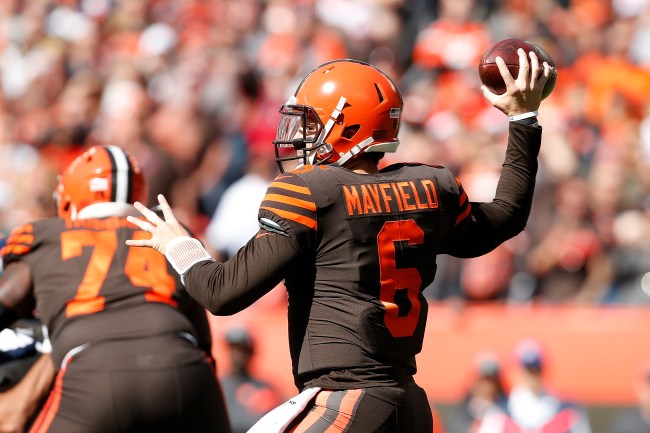 The Cleveland Browns are 2-4. Baker Mayfield’s 11 interceptions through 6 games are the most by a Browns QB through 6 games since Paul McDonald threw 12 back in 1984. The next Browns opponent are the unbeaten Patriots, who they will try to dethrone on the road. Things are bad.

During Cleveland’s 32-28 loss to Seattle on Sunday, Mayfield was 22 of 37 for 249 yards, adding one touchdown and three interceptions. The Browns blew a 20-6 first half lead and did plenty to shoot themselves in the foot, but a few head-scratching calls by the officials offered them no reprieve.

After the game, Mayfield decided to publicly take issue with the refs, calling out a particularly baffling call on a block from Jarvis Landry that was somehow called a blindside block and derailed a third quarter drive.

This was not even close to a blindside block by Jarvis Landry. Refs hate the Browns so much pic.twitter.com/AwsseApyfs

“The refs are never an excuse,” Mayfield said.

“I will probably get fined for saying this, but it was pretty bad today. The guy is squared up with him, running at him and he is lowering his head into Jarvis. What is he supposed to do? Avoid him? This is not bullfighting. I don’t know. It ticks me off.”

The Browns were penalized nine times for 83 yards, but the Seahawks earned themselves 10 flags of their own.

The refs have been and will always be flaming garbage. Can’t harp on things out of your control especially when Freddie Kitchens insists on throwing in the red zone when he has Nick Chubb in the backfield.