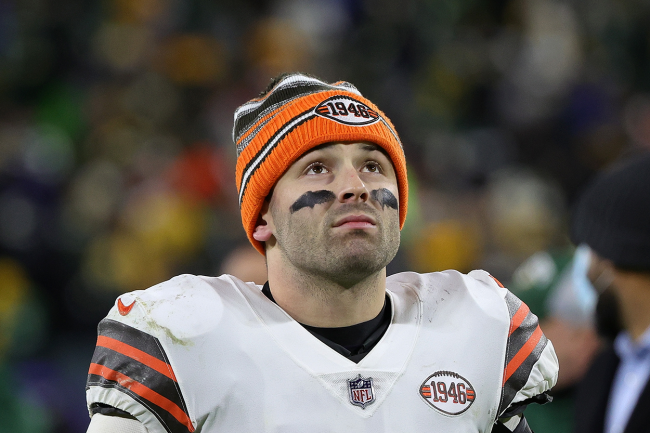 The Browns are stuck. It seems increasingly likely that Deshaun Watson will be suspended for the majority of the 2022 season, which leaves them at a crossroads at quarterback.

Should Watson be ineligible this fall, Cleveland appears to have its backup plan in place. It is certainly not what the organization had hoped for when it traded with Houston for the All-Pro quarterback at the beginning of the offseason, but it’s something.

There is also another major factor involved — what should the Browns do with Baker Mayfield?

As the saga with the former Heisman Trophy winner continues, he did not rule out a return to the team. Mayfield has expressed previously that his relationship with the team is practically un-mendable and has previously asked to be traded.

And yet— with that all being said — he left the door open.

More than likely, Mayfield will not play for Cleveland this fall. It’s not unthinkable, but it’s unlikely.

In turn, the Browns will probably have to turn to its Plan B and will continue to try and trade Mayfield in the meantime.

Should the former No. 1 overall pick be dealt prior to the season, it appears as though he would be shipped off to one of two teams. Mayfield’s potential suitors include Seattle and Carolina.

However, nobody really knows where or if he will be traded at all.

On Tuesday afternoon, it seemed as though if Mayfield was to be traded this summer, he was going to be dealt to the Panthers.

NFL insider Ian Rapoport joined the Pat McAfee Show on Tuesday and reported that the Seahawks aren’t really in the mix for the Browns quarterback.

“There’s a couple times a year this happens where you get like an Internet rumor that kinda takes on a life of its own,” he said. “And believe me, I always check. And I’ve heard nothing to corroborate Baker to the Seahawks at all. And, like, I don’t know what’s gonna happen at the end of all this. Like, maybe this guy announces he’s trolling us. It seems crazy to me, but they have never really been that interested in Baker. What they have wanted is a Drew Lock v. Geno Smith battle.”

In addition, Rapoport added that Carolina is most in pursuit.

“You know, obviously, it’s been the Carolina Panthers that have been most aggressive,” he said. “I know most people thought a deal would happen by the end of minicamp. It did not. So we’ll see, as we get closer to camp, if things pick back up. If a trade is going to happen, it’s probably going to happen before training camp at some point.”

Panthers players are set to report to training camp in Spartanburg, South Carolina on July 26th. That gives about three weeks for something to get done, based on Rapoport’s expected timeline.

This is inaccurate. Though I can see why it may be necessary to float this now: 1.) In case the Seahawks don't get Baker Mayfield. 2.) Because if #1 happens, it helps to manage the path ahead with their current situation. 3.) They still trying to figure out how I know/ heard ! https://t.co/Ei0mqHsoLL

It will be curious to see if Mayfield is traded south in the near future. It is also curious as to who is behind the smoke.

Are the Browns trying to drum up interest in Mayfield by leaking interest from the Seahawks?

Are the Seahawks trying to drive down Mayfield’s price by leaking a lack of interest?

Is it Carolina that is trying to drive down Mayfield’s price by leaking Seattle’s lack of interest?

Is Mayfield’s camp trying to speak his way to Washington by starting whispers in the background and hoping they gain steam?

Could it be Carolina trying to create a buzz that ultimately falls flat and leaves them with an upper-hand in terms of negotiations?

Might it be the media trying to create drama and headlines during a slow time of year?

Maybe it’s a little bit of everything?