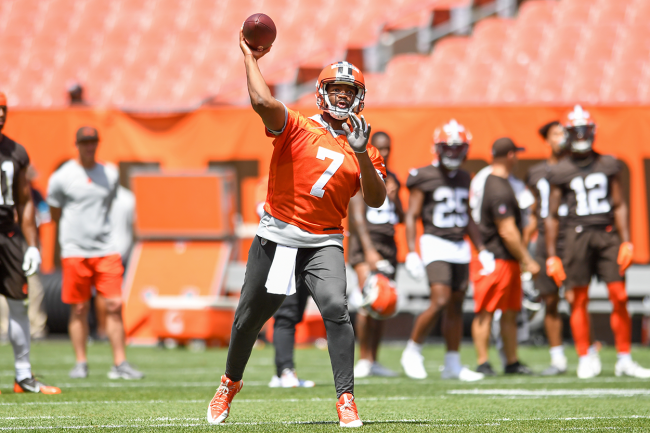 One of, if not the biggest move of the offseason came by the Browns. After sitting for a year in Houston amidst off-field issues, Deshaun Watson was traded to the AFC North and signed a massive contract extension.

But it was something of a gamble for Cleveland.

Watson was facing 24 civil lawsuits from 24 different women who accused him of sexual misconduct. Although he recently settled 20 of the 24 cases, that does not mean that he is out of the woods.

First and foremost, four civil lawsuits remain. Secondly, a settlement does not free him of any potential punishment from the NFL. Watson could still be suspended when the league closes its investigation, which it re-opened after a scathing New York Times report.

In fact, earlier this week, an anonymous NFL executive indicated that a lengthy suspension is likely still in order for Watson. Should that be true, it will keep him off of the field for a good chunk of time in 2022.

Who will the Cleveland Browns start in place of Deshaun Watson if he is suspended?

Should Watson be ineligible for any games this fall, the Browns would like to start Mayfield. But that ship has sailed.

Mayfield has made it very clear that he does not plan to ever suit up for Cleveland again and has asked to be traded. The team excused him from mandatory minicamp earlier this month and that will presumably be the same come training camp while they try to negotiate a deal.

There are reportedly two teams interested in Mayfield, but his contract is causing the hold-up. Seattle remains interested in bringing in the former Heisman Trophy winner, and the same goes for Carolina.

So Mayfield is essentially not on the depth chart for the Browns. He is not an option.

That leaves Brissett or Dobbs.

And according to Aaron Wilson of the Pro Football Network, it will be the former of the two options:

Meanwhile, the Browns are awaiting a lengthy suspension for Watson. There is concern from the NFL Players Association that the league will look to suspend the former Clemson standout for the entire 2022 season, if not indefinitely, according to sources. Should that happen, the Browns are expected to go forward with Jacoby Brissett rather than try to reconcile with Mayfield.

A scenario of trying to mend fences with Mayfield and have him play one more season for them after effectively rejecting him as their guy is considered all but impossible to accomplish.

With Mayfield out and Watson likely to be suspended, it seems like Jacoby Brissett will be QB1 in Cleveland this fall.